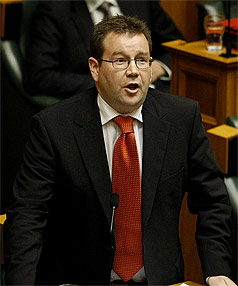 We asked the candidates if they want to post here. So we have now received Grant Robertson’s post.

Thanks for the opportunity to post on The Standard. In this contest I am a candidate for the Deputy Leadership of the Labour Party. In 1997 after six years fighting for fair access to tertiary education through the student movement I joined the Labour Party. I didn’t join to become leader or deputy leader or even to become an MP. I joined because I believed then, and I believe now in the values of social justice, fairness and equality that are the foundation of our party.

There is no doubt a challenging time lies ahead for our proud party. We are only just over a week out from a heavy defeat in the election. We can not shy away from that defeat, and the importance of learning lessons from it. We do have to search within ourselves to find the reasons and to address those reasons. I am proud of the social progress and change that Labour has driven, from the Savage/Fraser governments to the Clark/Cullen governments. We have changed almost every aspect of New Zealand life for the better (and occasionally we got it wrong) but it is a proud record.

That record is not at issue. What is at issue is how we respond to, and shape the world around us as it is today, and will be in the future.

We face a government that believes it has a mandate to undertake policies that will be hugely damaging for our country, that will further divide New Zealand, and grow the gap between rich and poor. We must take the fight to them in every forum. Winning in Parliament is part of that- but it is only part it. We have to take our message to New Zealanders that we are on their side and that we understand their hopes and aspirations.

I believe that our approach needs to be equal parts organisation and inspiration.

The starting point in terms of organisation is a thorough review of our party, its processes, its constitution and its organisation. Moira Coatsworth, our President has already announced that this is underway. We need to open up our party to new people, new ideas and new ways of doing things. We need to listen. We must lift our organisational capacity in every electorate. We must focus on attracting and retaining talent in our party, especially women, so that they can take on leadership roles. I also believe we need to look again at the way we select our candidates and list.

The strength of our party is that we are a broad church, united by our core beliefs in equality and fairness. We must maintain our connection with those that have stuck by us. We also have to reach those we have lost over time. And those who feel we do not understand the challenges to the future of our planet, environmental and social. In this especially are younger people who don’t have an historical connection to our party and see fresher alternatives elsewhere. For each of these audiences we need a clear plan, and campaigns and messages to reach them, and show them that Labour is on their side.

To me the heart of our challenge is how we re-engage with New Zealanders. The most disturbing trend I have felt in my time campaigning for Labour is that extent to which so many New Zealanders see politics as something that is done to them, rather than something they are part of. We need to be worried by the percentage of people who voted for us last Saturday, but we need to be equally worried by the number of people who did not vote at all. We must make a concerted effort to re-engage, and to engage differently with them.

We need every last ounce of political nous and strategy to get our message heard. Those are my strengths. As Deputy a vital role is uniting our team, and being a bridge between the Caucus and the Party. I have the background and political experience to do that. We need inspiration and passion in Parliament, and outside. I can be part of providing that.

Whatever happens in this leadership contest Labour will emerge renewed and ready to take our values forward, and I will be there playing my part to build the fairer, better New Zealand I joined this party for.

lprent: As a word of warning – I will be moderating and all comments on this post will auto-moderate.