WASHINGTON — Activists opposed to Arctic oil development have climbed aboard one of Shell’s contracted drilling rigs as it is heaved across the Pacific Ocean.

The six Greenpeace protesters ascended the Transocean Polar Pioneer early Monday morning, after days of trailing the rig now being carried by the heavy-lift ship Blue Marlin toward the United States.

Manned with food and supplies, they could stay on the vessel for days, with goals of sending tweets and videos to supporters around the world and fanning opposition to Shell’s planned drilling campaign in the Chukchi Sea north of Alaska.

“We made it; we’re on Shell’s platform!” tweeted Aliyah Field, one of the protesters. “We’re not alone. Everyone can help turn this into a platform for people power.” 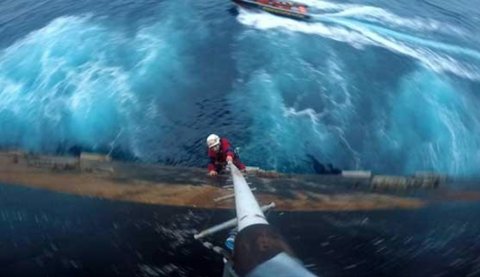