Happiness surrounds us in our lives; our music tells us to be happy, our facebook profiles suggest we’re always happy, and most of us have a willingness to work for material happiness. Yet happiness is a subject often missing from political discourse in our country, suppressed by talk of dairy and the dollar which dominates the halls of Parliament. This article will investigate the phenomenon of Gross National Happiness and how it might benefit New Zealand.

With the world walking into uncertain economic dangers, it seems appropriate to ask whether our leaders should seek guidance on our economic and social progression from Gross Domestic Product alone. The 20th century was dominated by bleak times of war and suffering dispersed throughout periods of extraordinary technological advancements. It also brought the era of consumerism and the ‘century of self’. This century grew upon the ideals of satisfying the emotional urges and feelings that drive citizens while suppressing underlying irrationalism. Economic growth has been seen as the goal, and satisfying emotional happiness appeared to be the ball.

The ideologies and governments of this century that promised happiness, have left people with more material possessions, but less psychological well-being. Many of those people are emotionally bankrupt and unhappy. The demands of life in our current socioeconomic system require that we keep running and running with little or no breaks. With increasing life costs, economic demands, and social and work pressures, most people are suffering from chronic stress, pain, anxiety, fear or anger. The term “rat race” applies more today than ever. Many people eventually experience this as burnout, exhaustion and/or depression. Many Americans are feeling unhappy at home and at work. (Source)

Might it be wise to introduce new measures to guide our society that truly fit our underlying social structures and help people cope with this “rat race” we call life? There seems no better opportunity than the period of global insecurities surrounding employment, an impending baby-boomer crisis, climate change, and stagnating economic growth that we’re experiencing right now.

Internationally, politicians have been warming to the idea of making happiness the centre of their social objectives for some time,

A recent survey (Easton, 2006) found that 81% of the UK population agreed that the Government’s primary objective should be the creation of happiness not wealth. Earlier this year David Cameron, HM Leader of the Opposition, put happiness firmly on the political agenda by arguing that “It’s time we admitted that there’s more to life than money, and it’s time we focused not just on GDP, but on GWB – general well-being” (BBC, 2006). (Source)

Striving to achieve happiness is not a new phenomenon of course; Aristotle claimed that happiness was the ultimate goal of humanity, and many nations have been founded on principles including the pursuit of happiness. However modern western societies, including our own, have been filling with prescriptions for depression and mental illness for the past few decades, I suppose some could argue the pursuit may have momentarily derailed, or at least taken a new twist.

That is not to say there has been no progress on the pursuit in the last few decades, it’s just that the pursuit has been dominated by private corporations. A Commentator suggests that this may not have brought expected consequences.

Whilst the interest in SWB within positive psychology is to be welcomed it is interesting to note that the commercial development of the subject is in the very countries where SWB is highest. This leaves positive psychology open to the accusation of selling self-help to the worried well.

The picture below is the first time such a study has been presented. The GWB data collected was compared against studies on health, education, and poverty. GWB correlated most with health, followed by wealthy and access to basic education. 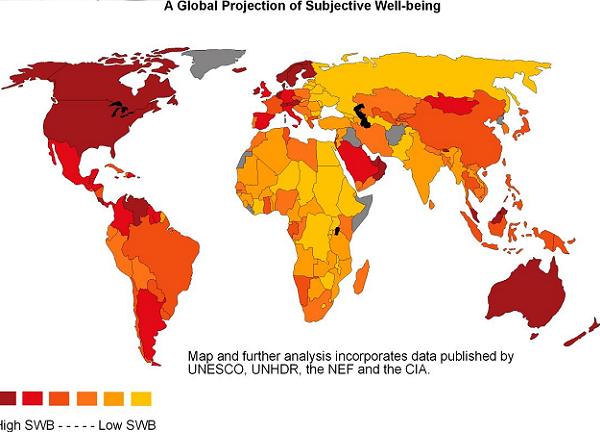 Gross National Happiness (GNH) is the predecessor to the General Well-Being (GWB) movement currently being investigated by various governments. GNH was a term coined in 1972 by then Bhutan’s King Jigme Singye Wangchuck. It was designed “in an attempt to define an indicator that measures quality of life or social progress in a more holistic and psychological terms than only the economic indicator of gross domestic product.” There has been significant research and interest in how GNH can be measured and implemented in the last decade. This video is a great introduction:

Work is going on around the world to investigate more appropriate measures of social and economic progress than just GDP, one such initiative is Beyond GDP.

The Beyond GDP initiative is about developing indicators that are as clear and appealing as GDP, but more inclusive of environmental and social aspects of progress. Economic indicators such as GDP were never designed to be comprehensive measures of prosperity and well-being. We need adequate indicators to address global challenges of the 21st century such as climate change, poverty, resource depletion, health and quality of life.

The implications for introducing new measures in a society such as New Zealand could have profoundly positive consequences. Our political leaders making policy decisions based on our general level of happiness and not merely on our GDP could allow for innovative thinking in many areas of social and economic tradition.

Our country offering a happy lifestyle as a political priority would make an attractive prospectus to any would-be brain drainer and of course many displaced foreigners.

It becomes apparent as a kiwi travelling abroad that our country is seen as a bastion of environmental purity and tranquillity by many, but some are starting to question aspects of our international image.

Bringing discussion of a subject such as happiness into mainstream politics would allow for wide ranging debate and a path to addressing more fundamental concerns within our society. The first step, however, should be gaining the consensus of opposing ideological views on the subject matter itself If you’ve got to this point and aren’t ready to give up on this subject just yet, we should turn to some more in-depth research being carried out on the subject. A good starting point would be defining our objective, happiness; which is likely to an area of significant contention. Tony Delamothe, deputy editor of the British Medical Journal, offers some guidance:

A study carried out by the International Institute of Management called “The American Pursuit of Unhappiness: Gross National Happiness (GNH) – A New Economic Metric” builds on this definition and offers insight into why happiness is important for our economy. The paper states that “while this white paper is written for the United States government, the analysis and recommendations are applicable to most countries.”

Why choose happiness as a subject for economic research? The answer is simple: mental and emotional well-being of citizens improves their performance and broadens the intellectual, physical and social resources of a nation. Research has found that happy people have better health habits, lower blood pressure, stronger immune systems and higher endurance levels. They cause less stress on the national healthcare system. Citizens with better emotional and mental health are easier to relate to and work with, tend to be better decision makers, are more creative, and outperform peers in problem-solving, innovation, persistence and productivity.

The role of government should shift from managing economic growth to socioeconomic development. American public policy should shift its focus from:

The Global GNH Survey measures GNH using the following indicators, which appear to offer guidance as to how happiness might be measured:

There are some New Zealand academics investigating the phenomenon of GNH, so if you’ve read this far then bonus points are at hand! Dr Ross McDonald, a professor at The University of Auckland, sets out his view on the impact of consumerism on our collective identity during one of his GNH discussions:

The consumer is the necessary ideal of capitalism – a type convinced that wellbeing necessitates accumulating ever greater volumes of goods. As a social entity however, the consumer has been proven to be a highly dysfunctional type. Its basic psychology revolves around a complex of dissatisfaction, social isolation and immunity to larger ethical sensibilities. It is hardly a type to encourage in any society aiming forging a sustainable and happy collective life.

Dr McDonald believes that before a society can introduce a measure such as Gross National Happiness it must first have a sustainable level of moral maturity. In another article on GNH, he discusses the consequences of consumerism and our lacking moral maturity:

Thus, we have come to inhabit a world in which a few hundred billionaires have more wealth than the poorest 2.5 billion people combined, one in which 40,000 children die each day from preventable starvation while wealthy countries throw out 15-20% of all food as uneaten waste, and one that is likely to be witness to the destruction of up to 25% of all living species as we seek ever greater market growth. Under the current doctrine of market pre-eminence, toxic pollution is a rapidly growing problem and global food security is in steep decline driven by collapsing fish stocks, changing weather patterns and declining soil fertility. National governments’ ability to contain the amorality of market ‘integration’ is on the decline as they become increasingly captured by the commercial imperatives that further embed gross inequalities in wellbeing. Millions are being driven into privation and dependence by the compete-or-die philosophy of the worlds dominating financial institutions … In sum then, post-Enlightenment modernity has lost its way as a direct function of its critical rejection of happiness as a conscious goal and of moral improvement as necessary.

The connection with happiness in Bhutan, the first country to introduce a GNH measure, draws many parallels with the philosophical teachings of Buddhism. In a society that has fallen foul of practicing traditional faith only to be replaced with a faith in the self, might a new way of measuring of our personal and collective satisfaction in life be called for, and how can this be achieved alongside developing a greater moral maturity?

The last words should be given back to Dr McDonald,

In Buddhist philosophy, happiness is an inseparable component of these [moral] maturities and thus, happiness as a goal cannot be practically separated from their preliminary cultivation. In significant part then, the question of how GNH might be maximised involves a more central question relating to how exactly generosity, sympathetic joy, loving-kindness and equanimity can be cultivated at all levels within a national polity – and extended to govern economic, ecological and social management.”