Guest Post: How many working groups did the last National Government create?

Like many of you, I’ve been very frustrating by how petty some of the attacks on the new government are, and I’m not just talking the daily ‘breaking news’ Op-Eds! One of the most annoying attacks, and one that has been getting a fair bit of traction, is that the government isn’t really doing any work itself, and as appointed working groups to do pretty much everything. This attack has been ramping up over the past few weeks, and last week National released a list of the 75 groups they claimed the government had commissioned to advise it on various aspects of policy.

The article ended with the rather weak statement ‘National has been asked how many groups it established in its first six months in government.’ And of course, there was no answer, and a week later there still isn’t.

Therefore, I decided if no one else is going to add up the number of working groups National comissioned in their first 6 months, then I should. I knew from memory of the previous governments activities that they were certainly not adverse to appointing advisory bodies. From the top of mind I could recall there were Tax, Savings and Welfare working groups in the first term alone, as well as the infamous ‘Jobs Summit’.

I went to the very useful archive function on the beehive website, and looked through the list of every press release or speech the government had sent out in their first 6 months. I tried to use the same criteria the National Party had used, in coming up with their list of 75. Of course, the current government has not started 75 working groups, so National had to use very broad criteria in coming up with 75. You can see National’s full list and associated hyperlinks here. To get this number they included:

They also somehow managed to count some reviews twice, when they were in two separate press releases. For example number 44 “The Prime Ministers commissioned a review into how Australia and New Zealand can work together to remove barriers to growing the digital economy” is somehow distinct from number 45 “We have also agreed to jointly commission a review of our policy and regulatory frameworks to ensure that they are creating an environment in which trans-Tasman digital trade is as open and facilitative as they are for conventional trade”.

Number 22 is also another cheeky one. This is a link to article which largely consist of Jami-Lee Ross critiscising the government for not making progress on a rates inquiry, that was referenced in the Labour-NZF coalition agreement!

This broad remit, gave me a broad remit to look into what National had done in their first 6 months. And this was the answer. 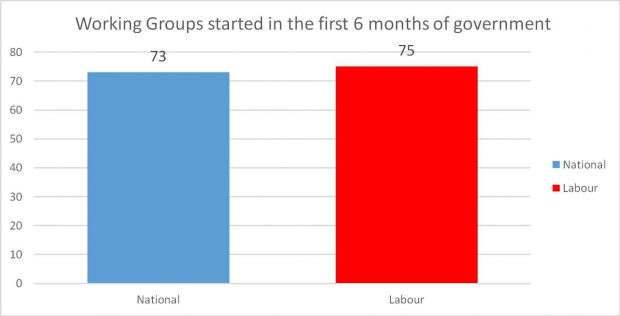 It took National 6 months and one week to reach 75. For full transparency, you can see the full list of review on google drive here.

This proves in my mind that the National oppositions attacks are totally spurious, and people should stop taking them seriously. Conducting reviews and consulting with internal and external experts is core government business. The nature of politics is that people often hear complaints with how current processes are working, however usually there are complex reasons that explain how current laws and processes work. Therefore, making kneejerk decisions without a full understanding of the issues is clearly dangerous, and I think Trump has shown us what happens if you govern like that. It is clearly important that governments take on board advice, and make decisions with a full range of facts in front of them.

38 comments on “Guest Post: How many working groups did the last National Government create? ”