Guest Post – Waitangi Day, build a bridge and get over it

A guest post by David Meech republished from the Jafacentral blogsite.

Some say we need to simply celebrate the day the way the Aussies do. Fire up the barbies, shake out the picnic blankets and crack open a really good wine and simply enjoy a nice day out at the beach.

But that wouldn’t be traditional. Traditionally we mark our national day by crouching around a t.v. at news time waiting for a big fight to break out up at Waitangi.

It makes for a good break in NZ politics. All that red vs. blue, nice to get in a bit of white vs. brown.

It’s frustrating that we haven’t put the emphasis back on British colonialism yet. The British are a proud people. They will stand up for their country. They will fight for and defend their country.

Sadly very few seem to want to still live in their country.

Ancient Polynesian cultures were cute and interesting yet nowhere near as flash as Captain Cook who actually went ahead and discovered them. Certainly the younger generations of suburban hip-hopsters find it increasingly difficult to maintain tribal beliefs in ancient mythical tales of demi-gods, magical abilities, heavenly and worldly inter-travel and rampant blood-lust compared to the steadfast, more truthful European histories of Jesus Christ, King Arthur, Robin Hood, Bilbo Baggins, Pinocchio and Santa Claus. Nevertheless Maori continue to make steady progress towards technological civilisation to the point where they actually do now buy into these rapidly drying pools of British colonial subculture, especially the tales about Robin Hood, who was indeed a nice generous guy despite his noted habit of robbing and shooting people.

We are a humble race we Pakeha. Not like the Maori flashing their bums about and poking tongues at royalty – some of whom are now weaning themselves off state welfare. We are proud of our achievements but we don’t need to overly show off about our culture. When Sir Ed climbed that mountain we didn’t need to spoil the show by draping our flag all over that mountain did we? How dare the Aussies claim Split Enz as Australian when we all know perfectly well that they left New Zilland to make it big – not Australia. No wonder Australians are somewhat dumbfounded by our remarkable understatements of achievement.

Maori have been pushing out into the foreground and spilling right over the bloody foreshore in the last few decades and are due for a decent tidal turn. Recent research has emerged that a bunch of discarded old stones found in the corner of a field near Hokianga are conclusive proof that Polynesians were once ruled by a Celtic master race. There is no conceivable way in which ancient Polynesians, renowned for world class feats of sea navigation, warfare and oral mastery, could possibly have randomly put stones on top of one another.

Ancient oral culture has been unable to defend itself against this well respected yet loosely documented ideology, coming as it does from an expert who, through sheer coincidence, happens himself to have a distant Celtic background. This same academic, now well into his last sherry, also postulated that the magnificent Great Zimbabwe fort, though positioned squarely in the middle of Africa, must surely be evidence of wandering lost Jewish tribes as distantly mentioned in a remote version of the bible, which he never got around to finishing, or wandering Aryans who, having raced half way across the globe, suddenly needed to stop and built a big old fort in the middle of nowhere before they rapidly disappeared up the annals of time. Or if not Aryans then maybe aliens, or Phoenicians, maybe the lost tribe of Israel but definitely not black Africans.

Maori are also notoriously fracticious, tribal and warlike. This does not bode well compared to the noble array of Saxons, Jutes, Picts, Britons, Romans, Pakistanis, Celts, Vikings, Chavs, Norman French and Jamaicans that underpin the unified Britain of today. Not the Jews since they were all kicked out. Clearly Maori have tended to bicker amongst themselves and need to learn from their European colonisers, the British and Scottish, Welsh, Northern Irish (they don’t get full club membership) and Irish who very seldom tend to bicker , and if they do quickly get over it with either a referendum or a few religious riots or bombings. And yes the odd football riot, a few of which managed to extend over into Italy (which of course was not fully unified until 1918 unless you include the Vatican and then okay it is still not actually unified). Clearly Maori lacked the technological abilities of these uber-races, and after Maori stupidly laid their guns down some 130 years ago, they failed to really push on and learn from the continuation of superior and more technological violence extending as it does from the mass encampment of innocent civilians in the Boer War; a neat little town square massacre in India; the Spanish Civil War; deadly conflicts centered on mass extermination in France and Belgium, (which by the way seemed to disappointingly escalate into 2 sadly global world wars against the Germans who were of course once our allies); the resultant soulless extermination of Poles and Jews; the firebombing of innocent civilians in London and Berlin and the inevitable desolation of Russia as we know it, terminating with the nuclear annihilation of thousands of Japanese at Hiroshima (did you know they used to be our allies ?); and on through the sectarian religious tribal viciousness of the troubles in Northern Ireland; mass ethnic exterminations throughout Bosnia and Serbia; threatened nuclear conflicts with the Russians (hey they used to be our allies); and a minor yet entertaining side-scuffle over a couple of windswept southern sheep farming islets remarkably close to Argentina.

Oh and of course the oil wars.

Whereas most Maori conflicts seemed to be over pathetic things such as food resources, territorial domination or survival, European conflicts have mostly held far loftier, noble and civilised causes, including, yet not limited to; “the war to end all wars” (see World Wars I and II); Christianity; Empire; the spread of freedom; measles; civilisation; democracy; Dr. Who and real estate franchising.

Clearly these Maori, though often entertaining at barbecues, are a violent, belligerent people whose former treachery must forever be held in suspicion. 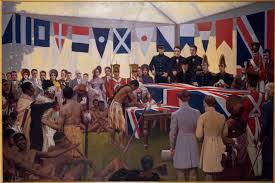 Maori need to move on from the past, and stop living in the past, whilst never for a moment forgetting that they are all actually derived from untrustworthy wild savages. These radical Maori should really stop deriding the rapidly drying pools of British colonial sub-culture when it is well known that, if not for the heroic efforts of British medicine they would surely have all died from the brutal and tidal onslaught of disease and pestilence as brought over by the early fleets of thoughtful and caring Christian real-estate agents. The cannibal thing can be forgiven, but never forgotten, and it needs to be brought up fairly consistently. Lacey and Danzinger in the No 1 bestseller “The Year 1000″, a clever snapshot of life in England at the time, mention on page 183, “there were horrendous famines which forced men into cannibalism…” Shocking isn’t it? Clearly this seems to suggest that in or around the Year 1000 AD Maori somehow embarked by canoe or Polynesian pirogue, navigated across distant voids, against tidal current and prevailing wind, found their way right unto the distant corners of Europe, disembarked upon the soft sandy shores of Albion and then proceeded to systematically and greedily feast themselves upon the innocent and unsuspecting carcasses of civilised English children.

They certainly had an uncanny maritime ability didn’t they?

Thank goodness Maori are all Christians now and can instead focus on all that I am the blood of Christ stuff.

Maori also need to stop reminding us about that silly old treaty. Yes we wrote the scratchy old thing; made the promises; guided the trembling hands over the burnished parchment; paid the glass beads; meticulously recorded it all, and then somehow failed to deliver on certain central key terms. It may be easy to stand there and say, “You stupid bloody colonial sheep-herding plonkers” – but constantly dwelling on this is annoying. Just because you were here first does not mean that you can’t share. Look at Ngati Whatua – they shared and they even got some of their land back, now that we’ve let them out of prison. Just build a bloody bridge and jolly well get over it. Stop living in the past. Even though you are historically warlike tribal cannibals at heart. If those Europeans had not arrived, grabbed most of the good land, cut it free from the developmental bugbears of rahui and rohe, chopped down all the trees, covered it over in sheep grazing and pine forest, polluted waterways and leeched land to the point where it is no longer good for anything bar residential subdivision by bankrupt, white-shooed, coke-snorting property developers from Queensland, we could never have brought this hallowed Western concept of ecological conservation and restoration that is now rapidly overtaking our good nation.

By holding back the construction of hospitals and schools in the Tainui region, and then forbidding the use of their language in public, we were actively forcing them on into civilisation and jolly well letting them know that they should be thankful that they were not colonised by South Africans or something. Or even worse, and God forbid, by those annoying French people, with their complicated concepts of fashion, cuisine, artistic endeavour, social housing, universal education, social equality, health schemes, amazing variety of perfumes and aftershaves, world class cellars of wine, focus on quality, beautiful table manners, pensive architecture, scientific and intellectual endeavour, concepts of beautiful design, gourmet mayonnaise and the uncanny ability to dress astoundingly well in the morning. Maori today may find themselves penniless, asthmatic, unemployed, wearing jandals and renting a partially insulated leaky home off the daughter of a Chinese Party member, but they should always be thankful for the introduction of meat pies, marmite sandwiches and the superior technological advantages of no.8 wire.

Look we all know they weren’t really here first. The steadfast refusal of academic Maori to acknowledge the only partially debunked myth of Moriori (Maru-Iwi?), a small statured race of dark-skinned space invaders, who arrived moments after the boatloads of flax-haired Celtic Kings, is bloody annoying to say the least. How can you possibly refute the existence of an entire race of people when clearly you can’t even get their name right? Maori today refuse to watch the documentaries, listen to the talkback shows or watch the YouTube posts, and spend far too much time watching Homai te Pakipaki.

Look putting it bluntly Maori just need to buck up. Like their friendly British-based real estate franchisees and colonial roastbusters, they need to formulate wordy European-type verbal and ideological constructs which launch far up and away into the air soaring high and right over (and barely recognising or relating to) the relevant facts or detail pertaining to the historical issues of our time.

So let’s just bloody well build a bridge and get over it.

30 comments on “Guest Post – Waitangi Day, build a bridge and get over it ”