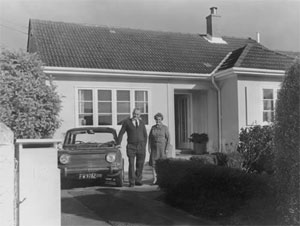 Today marks the 70th anniversary of the opening of the Labour Government’s first state house by Michael Joseph Savage.

The aim in 1937 was to build 5000 new homes a year in an effort to rid New Zealand of sub-standard housing. No mention of any of this over at Kiwiblog, where National Party blogger and staff member David Farrar is more concerned with sniping at Cullen’s past consideration of tax cuts.

Perhaps this shouldn’t come as much of a surprise. As was revealed at the last election, the Nats’ record on state housing ain’t that flash. Best to keep it in the closet?

While Key has claimed in the past that “I look at [having lived in a state house] as a great marketing ploy for me” it’s far from clear that he and the Nats are as keen to see the benefits shared with everyone. Key’s strident opposition to a proposed Hobsonville development that was to include 15% state housing stock spoke volumes. When it comes to the crunch apparently he’s against state housing if it’s anywhere near his backyard, describing the much needed housing development, “a potential ghetto”.

The Nats’ ‘back to the future’ policy of “allowing” current state house tennants to purchase their homes (despite the fact that most can’t afford to) drew the following response from Kevin Reilly, the Manawatu Tenants Union co-ordinator:

“.the more his party’s policies are put to the test the more they are found wanting, especially those relating to housing. With housing it’s the same old recipe, a recipe for failure.”

Hear, hear. For more on the history of state housing in NZ, there’s a good article over at New Zealand History Online.