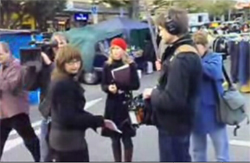 Just in case you don’t know, today is John Key’s first anniversary as National Party leader and his backers have given him the gift that keeps on giving & well over $50,000 worth of boring propaganda. Others including our good mates at blogblog have done the analysis of the spin behind this one so I thought we’d employ the oldest of journo tricks and follow the money. That’s why I had a talk to a few of my mates in the film industry and guess what? Film ain’t cheap. I’ve had a bit to do at the amateur end of the scale but today I’ve had a crash course in just how rich you have to be to make this sort of thing.

We sat down and identified this as at least two weeks of shooting across at least four locations: Christchurch, Wellington, Porirua and Auckland. We’ve all seen Key’s crew in the Porirua market video. It’s at least a seven person crew. That’s an assistant, two cameras, a soundperson, a director and a couple of stills photographers. For each of these factor in $2000 a week plus expenses (maybe $500 for the assistant) and remember we’re talking expensive expenses & each of these people is being flown around the country being fed and put up in hotels.

Then there’s the cost of gear. The first camera (there are some shoots with three) is probably a digibeta & that’s at least $500 a day and by the time you factor in all the other gear we’re looking at $1000-$2000 a day in gear. And remember there’s probably up to ten days of shoot here. That’s up to $40k on gear and staff alone.

Then there’s the cost of editing. A suite with an editor will run to hundreds of dollars an hour and there’s a good three day edit here. Add to that the cost of a sound mix at $3000(ish) and authoring it to DVD (at least another $2000) and the numbers are starting to add up. And that’s not counting the scripting cost & though I get the feeling our taxes paid that one because I’m sure Key will have a publicly funded communications adviser who can script a shoot.

What really blew my mates away though is the use of Coldplay & the truth is none of us knew what that would cost because it’s just out of the league of anyone we know. But here’s a little story. I went to dinner with a record label owner the other night & nothing special, just a struggling indy label with a few good acts. But here’s the kicker & he’d been approached by an ad company wanting to use one of his songs for an ad campaign in the UK. Their offer for the UK rights for a year? Forty thousand pounds. And that’s for an unknown band. Now, when you use a band’s music on the Internet you need the world rights and when that band’s Coldplay? Man, I can’t even guess what that would cost.

So this is the deal & at least $50,000 just to get the thing made and then who knows how much for the right to play “Clocks”. By the looks of it they’ve shelled out for a MediaOne video advertising campaign on the Herald to promote it too.

Now that’s a lot of money by anyone’s standards and given the fact that it’s a tedious bloody thing (and even the most sycophantic Tory adviser could see that) the question is why? No, scratch that, actually the real question is “Why???” Well I’ve kicked this around and all I can figure is that it’s the old story of them trying to get their spend in early. After all that’s a big chunk of cash they’re spending this year so they have a resource for next year that will be outside of any EFB campaign period.

Amazing, all that cash just so he can sell himself as an ordinary bloke. Happy Anniversary John.

UPDATE: For those arguing our figures are inflated because Key may have relied on volunteers, think again. Looks like he’s engaged the services of Production Shed TV, an outfit that boasts “over 40 years of combined industry experience, along with solid connections to many major industry players.”