The crises in housing and unemployment are hitting some demographic groups harder than others.  There are worrying trends of increasing marginalisation and struggle for some demographic groups. Meanwhile other groups that were previously less vulnerable, are struggling.  There has been a significant worsening in employment for men, which probably is due to there being fewer secure, well-paid, full time jobs available.

At the same time, the struggle over affordable housing, and the dismantling of state housing, seems to be impacting most on the high proportion of women, Maori and Pasifika people that are on low incomes.

A closer look at the latest Household Labour Force Survey (pdf) shows some worrying underlying trends.  In recent quarters women have had a higher increase in their unemployment rate.  In the September Quarter, while there was a rise in unemployment for both men and women, the biggest rise in unemployment was amongst men, with self-employed men being particularly hard hit.

According to statistics that are not seasonally adjusted, older people have also been hit hardest, with an increase in unemployment amongst those aged 50-54 (up 4,000) and 60-64 (up 3000). There are also worsening trends in employment for 45-49 year olds.

This does not mean good news for young people, just that their unemployment statistics have remained flat over the last quarter.  However, there has been a slight increase in the unemployment (or NEET*) rate amongst women (*Not in Employment Education or Training).

In general, the wholesale industry lost 12,700 workers (male and female) over the year. Women’s employment increased significantly in the retail trade, and also in accomodation and food service indusutries.

Women tend to do more part time, casual and low paid work than men.  So a shift towards worsening employment statistics for men, probably is a result of a decrease in well-paid, full-time work. The labour force participation rate (that includes employed and unemployed people) rose, with most of this being due to more women looking for work. This is probably a reflection of the fact that more households are struggling to make ends meet.

Nowhere is this more evident than in the impact of the decrease in the amount of affordable housing.  Part of the struggle around this, is to stop the government removing state housing, and/or shifting state housing to marginal and undesirable areas.  Last night a group (largely made up of women) continued their protest against the removal of state housing in Glen Innes, undeterred by the wet weather.  These protesters are staunch, and the indication is that they include a significant proportion of women, Maori and Pasifika people:

Many were back, including Maxine Ngata who claimed she was helping move an elderly woman out of the way when she was arrested.

“An officer hooked his arm around my neck from behind but I managed to get away. I ran up the road and he shouted to two men to ‘get her’.

“My arm was twisted behind my back, they tried to push me to the ground but couldn’t.”

She’s upset that her home will be taken from underneath her family, which will move to Henderson.

“My dad’s been a minister at the Tongan Methodist Church for 26 years. He was basically told to find another one in Henderson.” 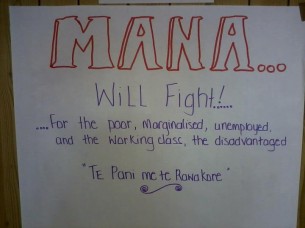 This is probably why the Mana Party is at the forefront of this struggle.  Prior to last night’s protest they had called for a media presence to ensure against police brutality.

The overall employment statistics are an indication of the worsening of harsh living conditions for many.  A close look at the statistics shows which groups are doing it the toughest. The worsening employment situation for men, indicates more people that were previously unaffected, are now facing an insecure existence.