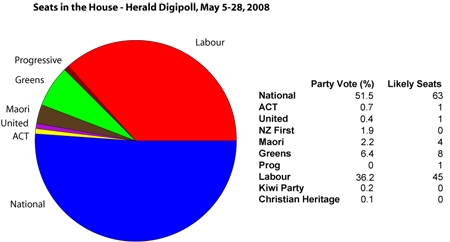 Another Herald Digipoll is out today, with a sample taken both before and directly after the Budget.

The poll pretty much confirms what Roy Morgan showed us last week – the gap between the two main parties remains about fifteen percent and the controversial and highly publicised Fairfax poll was probably a rogue.

Of course, the Herald’s primary purpose is to sell newspapers, not provide you with a considered analysis, so they have to make this poll sound interesting. The angle this time is that there’s been no bounce for Labour from the Budget.

That’s to be expected – this far out from an election changes in party support tend to build up over time, not as a result of one single event. The key here is to look at the trend in multiple polls over time. Trying to read too much into any single poll makes sense for the people who commission them, but for the rest of us it’s pointless.