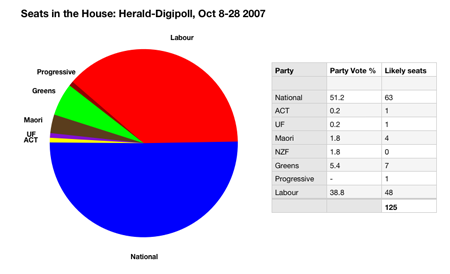 Today’s Herald Digipoll is not good news for Labour, coming off the back of last week’s positive Roy Morgan poll which showed a centre-left majority. As the Herald notes, on the basis of this poll National has enough support to govern alone.

But what it also demonstrates is the mistake National has made in devouring its potential coalition partners (ACT and UF score a pitiful 0.2% each). MMP doesn’t look too fondly on parties gaining a majority by themselves, and as the election nears and National’s vote inevitably drops down to the mid-40s the numbers game will start to look very different.

Labour’s vote has actually held up pretty well, and at just 0.8% less than the last Digipoll it’s well within the margin of error. Still, they’d be feeling a lot more comfortable in the early-40s, especially with the Greens a little closer to the 5% mark than they’d like.

In a strange twist that would appear to cast some doubt on the poll’s accuracy, Helen Clark has increased her lead over John Key in the preferred Prime Minister stakes, leading him 50.8% to 37.3%. This is odd because preferred PM generally tracks pretty well with the party’s fortunes.

Also of interest is the projected size of the Parliament, with ACT, United Future and Progressive’s low polling adding to the Maori Party’s usual overhang to stretch the house to 125 seats.