The Herald’s use of sub headings needs a real rethink.

It ran a Cameron Slater sourced smear this morning and talked about Cunliffe meeting a prominent New Zealander who had been given name suppression on charges of performing an indecent act.  The juxtaposition of the photo to the sub headings is unfortunate.  Can I assure everyone that Liz Craig is not the sex offender they are talking about.

… the Labour leader threatens to be distracted by internal ill-discipline and criticisms over his judgment, including the holiday itself and a meeting last week with a prominent New Zealander given name suppression on charges of performing an indecent act.

Mr Cunliffe confirmed to the Herald last night that he had arranged for the person – whose case has been the topic of media coverage – to meet a Labour candidate but said he had no idea about the controversial background until yesterday.

“If I had known of the suggestion, no such meeting would have taken place.”

You have to wonder why the meeting was mentioned and why it was thought that it would cause a distraction to Cunliffe.  No doubt the intent is to continue with the bad news narrative that the right have been pushing but what was Cunliffe to do?  Have a Police vette conducted of all people that he may meet?  Even this would not have helped because the person involved received a discharge without conviction and had all details suppressed.  And Cunliffe confirmed to the Herald he had no idea of the background until yesterday.

The article reinforces National’s Modus operand.  Jason Ede’s black ops accumulates damaging information on people.  It is fed to Slater who dresses it up and posts about it.  The main stream then repeats it.

And another day will be spent dealing with the distraction caused by a right wing smear.  It is going to be a long campaign if this sort of crap is going to be repeated every day.

If they really want to analyse corruption and dirty dealing can I suggest they run this sub headings: 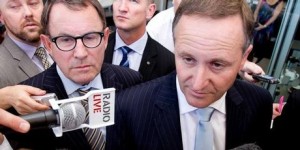 Comments speculating on who the prominent New Zealander may be will be deleted.