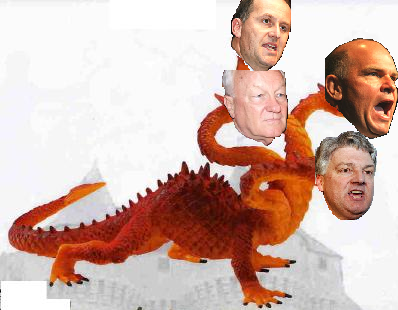 So, we can all make up dumb pictures and say ‘beware of many-headed monsters’. Let’s, instead, ask if National’s attack makes sense.

Secondly, any Labour-led government is likely to be simpler than the current government. Currently, we have a coalition of two parties, supported by two more parties on confidence and supply, with an abstention agreement with a fifth party, and voluntary abstention from a sixth. Those agreements are only so complicated New Zealand First and United Future wanted to maintain separation from the Government and refused to work directly with the Greens.

Thirdly, the Labour, Green, Progressive, and Maori parties share a common underlying ideology and a common history. They simply represent different streams of left-wing politics, which have been able to successfully divide into separate, sustainable political parties under MMP. On the big issues, these parties agree and where they differ it is usually by matters of degree, not direction.

Contrast that with a National/ACT/UF/Maori Party arrangement. Free-market zealots in ACT, United Future’s christian conservatives, the Maori Party’s strong socialist and environmental roots, the Nat’s heady blend of born-to-rule conservatives and businessmen doing their time protecting their class interests. It would be a disaster and totally unworkable. The Maori Party votes less than one-third of the time with National and ACT; there is no legislative program such a government could successfully pass. Instead, there would be inertia and eventual collapse. Not what we need in a government right now.

It’s pretty obvious why the Right is trying to run this line, along with its twin ‘most popular party gets to govern, not most popular coaliltion’. They are terrified of how badly things are now going. Among the public polls, half are showing a LPG+M government would be the most likely outcome and the Right’s support is trending down. The internal polls are stronger for the Left. The disaster last week has yet to flow through into the polls and everyone suspects that the polls undercount support for the Left.

All that aside, the really interesting thing is that they’ve included the Maori Party in this five-headed monster, effectively conceding that a National-led government won’t get the Maori Party’s support. They’ve replaced the Tory/Maori Party fairy tale with stories to scare the kids. Problem is, they’re still stuck in fantasy-land.