I came across this 33 minute film, Housing in New Zealand (1945) on Archives NZ’s youtube channel.  It is a film produced by Public Works Department Film unit, and graphically shows the massive building of state houses that swung into operation after the war.  It had been planned prior to the war, but was interrupted.

The aim was to end the housing problem that seemed to have existed for a long time in NZ, and to ensure that all NZ families had a home to rent or buy.  Prior to the state house project, factories had focused more on providing cars than houses.

The film is very much of its time.  The narrator sounds like an upper class Brit, and NZ is located in terms of it’s distance from England. The film starts by focusing on Pakeha NZ families.  Though later on it shows Maori and Pakeha building the houses.

There are many ways in which the project was simpler than in today’s Aotearoa.  The department pulled in as many workers and resources as necessary, with many men working double shifts. The aim was also to enable men to develop building skills on the job.  They used diverse materials – wood was there for the taking, as well as brick, asbestos (ewww!), etc; as much greenfield as needed was bought up by the government. And interesting also, that the department aimed to build better quality houses than the previous privately build ones – the profit motive had taken priority over quality. 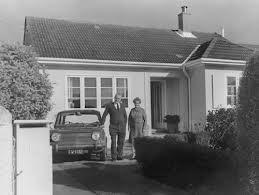 In the 1945 film, it was interesting also to see the kind of survey done prior to the start of the project: it was colour coded, kind of like post quake Christchurch. However, there was also a colour to show which homes were overcrowded.

However, one thing that we can learn from it for today: the government looked at what was needed, then looked for practical ways to provide them.  All that’s needed is the political will!