Hone Harawira is getting the band back together

MF: It’s been said that when it comes to politics the only Maori party that lasts is the one with the guitar.

She introduces Harawira with a humorous analogy of Mana’s recent history and whether he will get the band back together.

MF: are you putting the band back together?

HH: yes, absolutely, look no offence to the 25 Maoris in parliament, they’re kind of like hardly noticeable eh? You’ve got to have someone in there who is a fighter, somebody who won’t be cowed by party politics, or parliamentary politics and who’s going to stand and say what needs to be said whenever it needs to be said. And I think Kelvin’s tried, I think Marama’s tried, but they keep getting squeezed back into that party box. Māoridom needs a fighter, not just a backing vocalist 6 rows back.

On the Make Up of Mana

MF: and who’s going to be lead singer, is Annette Sykes, will she be part of that mix? In Waiariki?

MF: any other back up singers? What about Sue Bradford and John Minto?

HH: well we’re looking at Jordan Winiata, for bass player. But John and Sue and them, they really don’t have the rhythm eh, so …

HH: no, no, no… they may be roadies, helping set up the gig and break things down…

MF: so it is the Mana Party, it won’t be any other…

MF: are you going after the Māori Party votes?

HH: Oh, I’ve had approaches from one, two, three, four different people within the Māori Party. I don’t want to prejudice what’s going to happen as a result of those discussions but I’m happy to talk to them about ways and means in which we’re not necessarily having to  stamp over one another.

MF: so you’re open to looking at a mix? Lots of people have raised Mana/Māori before, or you’re just going to have talks.

HH: since the day I won my seat, and I remember Hine Brown asking me that question and I said, way back then, I said my door will always be open for discussions with the Māori Party, and that remains the same today.

HH: I think he sings from a different song sheet that boy. And it’s not exactly the song sheet that fits the Mana profile. He seems to be a nice enough guy. But he keeps bouncing around from trying to sound tough to trying to sound centrist. And I just think the leader of the Labour Party should have made up his mind by now, that Labour was never meant to be a party of the centre, it’s meant to be a party of the left. A party fighting for the working class. The old working class doesn’t really have a champion. The poor don’t have a champion. That’s Mana space these days.

MF: when we talk about Labour, let’s talk about Kelvin Davis […] how sure are you that you could win that seat back off him?

HH: I’m not going in to win it back off him. I’m going in it to win the seat back for Mana. Because the people of Tai Tokerau deserve Mana back in the house. And I’m the man to take it there. No offence to Kelvin, but that’s the game.

HH: Feed the kids, I know John Key’s talking feed the kids now but I’m talking about realistically feeding the kids. When you’re talking about feeding the kids you’re also talking about housing the homeless. And you know I have to say I felt a little bit embarrassed about everyone jumping in their vans for the night. In vans with good air conditioning, all that kind of stuff, nice warm vans. I mean if you want to do something like that, you go pick up a homeless person, they’re not that hard to find… come back to my place for the night. I mean that’s what you do if you really want to try and make a difference. So yeah, there will always be those things, that are desperately needed at that level.

MF: What Mana is good at

HH: yeah what Mana is good at.

The interview had more on Davis, what happened with Internet/Mana, a bit on Harawira’s health, and a nod towards the Green Party. Full interview from The Hui is here. 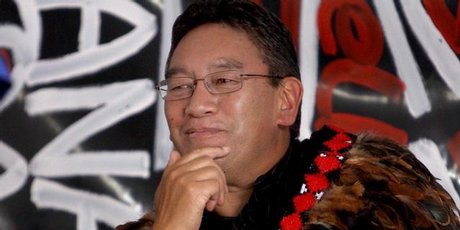 54 comments on “Hone Harawira is getting the band back together ”