House prices are a pretty good indication of how the economy is going. They rose rapidly in the 2000s, stalled in 2007, plummeted in 2008, and made a slight recovery in 2009. But now they’re heading downward. The median house price is over 16%, adjusted for inflation, below the peak in late 2007 and I reckon they’ve got a long down way to go yet.

Houses are still way over valued as you can see from these graphs: the inflation-adjusted median price from REINZ and the total value of housing divided by the total incomes of households from the Reserve Bank. 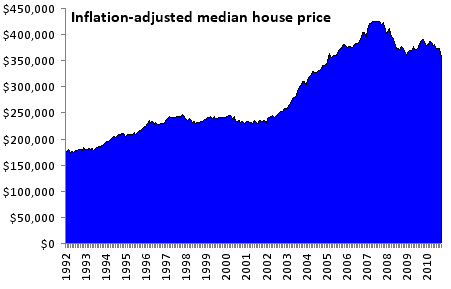 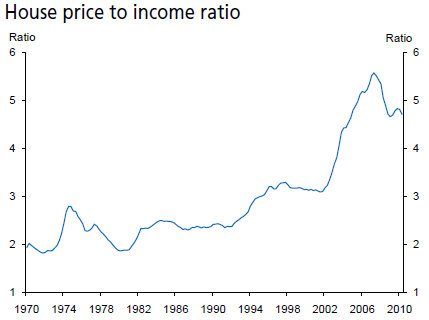 It’s remarkable how few houses are selling. This October’s house sales were the lowest since at least 1992 when the records begin. People are staying put because they can’t afford to realise losses on their properties and no-one can afford to buy at the prices those who do sell are insisting on with real incomes falling and unemployment still far too high.

There may be another element. In the US, banks are not foreclosing on delinquent mortgages for fear of having to realise the losses on their books and because they don’t want to place even more properties on a sinking market, forcing the prices even lower and putting more of their customers underwater. The Reserve Bank says our banks have $6 billion in non-performing loans (ie. they’re not being paid back). Nearly 1.5% of mortgages are not being paid, up from less than 0.5% in 2008 and still climbing. Mortgagee sales account for 5% of all sales compared to 0.5% three years go but are the banks holding back on forcing more of them for fear of depressing the market even further?

There’s not a hell of a lot that can be done to avoid this. We let the bubble grow, now it’s got to deflate. And there’s still a long way to go.

The crucial thing is that we don’t let investment in new housing and housing improvements dry up, as they naturally will with falling house prices. This is where the government needs to lead with a big programme of eco-smart State House building to keep our builders in work and improve the quality of our housing stock for decades to come.

On a side note, I looked at the decreases in house price by decile. All the deciles are at their lowest levels since the peak except the top decile, which is up 4% from its low point. It is also down the least from its peak of any decile. Which give you an idea of who has weathered the economic crisis the best, although even the resurgence in that top decile seems to be faltering.