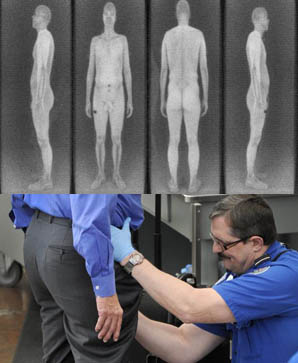 9/11 seems to have driven America crazy. The wars. The torture. The new surveillance powers and the roll back of civil rights. Most Americans, I think, don’t realise how much their country has changed around them. But one very visible manifestation of the change is getting right in the public’s faces, and finally provoking a mass reaction. That is, the new generation of security scanners that is being rolled out at airports across the country.

Air travellers — of whatever age or physical condition — must now choose between a scan and a highly invasive full body “pat down”. Horror stories of both options are beginning to circulate.

So this, finally, is an issue which has made the great American public wake up and take an interest. This report from USA Today is typical:

The nation’s Homeland Security chief asked for air travelers’ “cooperation” and “patience” with full-body scanning and pat downs this holiday season amid a growing public backlash that the airport tactics are intrusive.

“Each and every one of the security measures we implement serves an important goal,” Homeland Security Secretary Janet Napolitano writes in a column for today’s USA TODAY, which asks the public to be a partner in defending against terrorism.

Or this from CNN:

A growing pilot and passenger revolt over full-body scans and what many consider intrusive pat-downs couldn’t have come at a worse time for the nation’s air travel system.

Thanksgiving, the busiest travel time of the year, is less than two weeks away. Grassroots groups are urging travelers to either not fly or to protest by opting out of the full-body scanners and undergo time-consuming pat-downs instead.

The revolution has produced its first folk hero:

The uprising began with a single warning in terminal 2 of the San Diego airport: “If you touch my junk, I’ll have you arrested,” John Tyner of Oceanside, Calif., warned a TSA agent on Saturday after refusing to enter the airport’s full-body scanner and opting for a full-body pat-down instead.

Tyner, who filmed and blogged the entire encounter, eventually chose to abandon his travel plans rather than submit to the pat-down, and has become a kind of folk hero to those who say the TSA’s increasingly invasive security checks have gone too far.

Amidst the popular outrage only a few, the usual voices of the left, are focusing on the underlying issue:

The Terrorists Have Won

The lede on the DRUDGEREPORT most of Monday showed a Catholic nun being patted down at an airport security checkpoint, with the caption starkly declaring that “THE TERRORISTS HAVE WON.”

Ten years after 9/11, Americans who fly are facing a Faustian choice between subjecting themselves to a virtual (and potentially medically damaging) strip search conducted in questionable machines run by federal employees or a psychologically damaging pat-down of their bodies. Osama bin Ladin must be giggling himself silly this week.

It would be nice to hope that this scanner issue would spur America on in to a real debate about how they have responded to 9/11. Ask what was justified and what was not, ask how far they should pursue the impossible goal of zero risk. But they won’t. The fuss will soon die down and everyone will get used to the brave new world. And soon the government will take the next step, removing more rights in the name of security. And the next, and the next, and the next….

49 comments on “How much security?”