How Obama did it 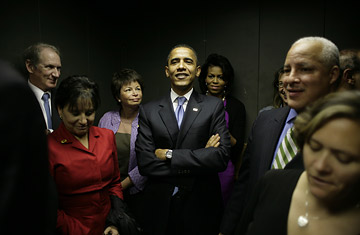 Time has a special report on how Obama “become the first Democratic insurgent in a generation… to knock off the party’s establishment front-runner”.

Obama’s Chicago headquarters made technology its running mate from the start. That wasn’t just for fund-raising: in state after state, the campaign turned over its voter lists â€” normally a closely guarded crown jewel â€” to volunteers, who used their own laptops and the unlimited night and weekend minutes of their cell-phone plans to contact every name and populate a political organization from the ground up. “The tools were there, and they built it,” says Joe Trippi, who ran Howard Dean’s 2004 campaign. “In a lot of ways, the Dean campaign was like the Wright brothers. Four years later, we’re watching the Apollo project.”

Even Obama admits he did not expect the Internet to be such a good friend. “What I didn’t anticipate was how effectively we could use the Internet to harness that grass-roots base, both on the financial side and the organizing side,” Obama says. “That, I think, was probably one of the biggest surprises of the campaign, just how powerfully our message merged with the social networking and the power of the Internet.”

5 comments on “How Obama did it”