How to wreck a busway 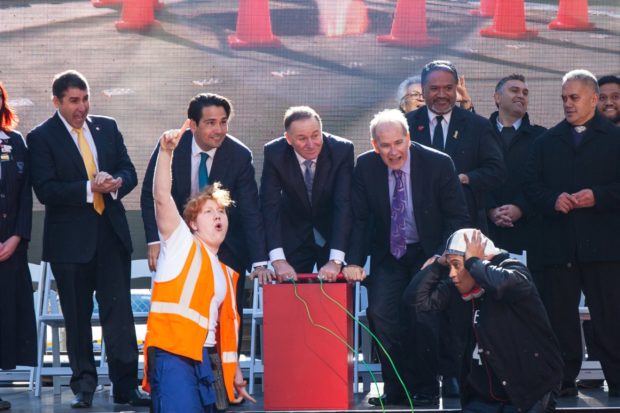 The Northern Busway has been an outstanding success.  The project started in the late 1990s and was officially opened in 2008.  It was credited with initially removing 500 cars per rush hour.  The parks around the stations were full shortly after the opening and drastic improvements in congestion around the Harbour Bridge were observed.

The busway works because it is for the exclusive use of busses.  The increased effectiveness and frequency of services means that catching a bus saves time as well as the stress of having to navigate rush hour traffic.

Transport Minister Simon Bridges has come up with an unusual idea, that busses should share busways with electric cars so that the uptake of electric cars can be increased.  It is good that he is thinking about how to incentivise vehicles with no greenhouse gas emissions but to let them use bus lanes will completely undermine the reason that bus lanes work.

Transportblog described the proposal as completely nuts.  From the post:

This is madness. The whole point of busways, bus lanes and to a lesser extend transit lanes is to make buses, which are much more spatially efficient, more viable and work better. They can make buses:

The introduction of bus lanes meant that far more people have been able to be moved along many key corridors than they would have otherwise. For example, the Northern Busway carries about 40% of all traffic crossing the Harbour Bridge during the morning peak – five lanes of traffic and 40% of the people are in fewer than 200 vehicles. On other corridors like Dominion Rd more than 50% of people are on the bus yet in both situations the lanes can look empty. But a bus lane that looks empty normally means it’s actually doing its job and allowing buses to flow, uninterrupted by congestion.

Adding electric vehicles to this, which will mostly be carrying only a single occupant, will undo some of the benefits and make buses less efficient. That’s because there’s a greater chance that buses will be held up or miss lights etc. It means a double decker carrying 100 people have the same level of priority as a single person in an electric car. And this isn’t just theoretical, back in 2010 the old Auckland City Council trialled changing the then Tamaki Dr bus lanes to T2. As the results of that showed, it actually had the effect of slowing other road users, especially the general traffic. One of the reasons for this is the T2/3 drivers would push back in to the general traffic queue to get around buses at bus stops.

But it appears that not only is the idea crazy but Bridges did not even consult with local authorities before announcing the policy and ignored advice to do so.  From the Herald:

Transport Minister Simon Bridges ignored official advice to consult with councils before announcing he would allow electric cars to use bus lanes.

He now faces a backlash with one council indicating it won’t implement the policy and another considering whether to enforce it.

Documents from the Ministry show he was told it would be “important to discuss” the measure before making any form of announcement on the Government’s high-profile, multimillion-dollar bid to get more New Zealanders into electric cars.

The advice said councils would likely be uninterested in allowing electric vehicles [EVs] in bus lanes because of the impact on public transport.

But the Herald checked with the nation’s three biggest councils, Auckland, Wellington and Christchurch, and none say they were consulted with before the announcement.

Bridges claimed the proposal was necessary to improve the uptake of hybrid vehicles but the experience in Norway was that it impacted negatively on the operation of PT.

The proposal trespasses over areas where local authorities have primary responsibility.  In the future before doing so it is hoped that Bridges and the Government will at least talk to local authorities about what effects proposed policy changes may have.  And listen to that advice.