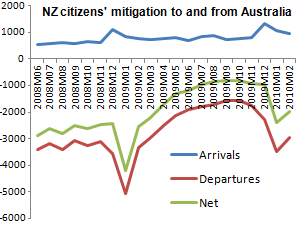 You’ll remember that one of John Key’s big election platforms was emigration to Australia. Key said too many (white-skinned) Kiwis were going over to Aussie, with the logical collarary that this meant we had to bring in lots of (brown-skinned) non-Kiwis to replace them.

Key told us, the solution to this ‘problem’, as with just about any other problem you care to name, was tax cuts.

Well, tax cuts we had. Labour’s across the board cuts in October 2008 and National’s smaller ones targeted at the rich in April 2009 (that they had to partially cancelled because, as economic geniuses, they had missed that we were in the middle of a global recession). What happened to the number of Kiwis heading over the ditch? 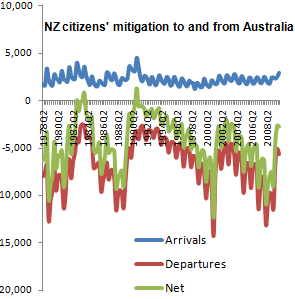 Must have dried up, right? That Nice Mr Key promised.

Sorry kids. There was a brief decrease in net emigration that I’m betting was caused by the same factor that has lowered the number of people leaving their jobs to look for other work in New Zealand – ie. every bugger was afraid of not being able to get work. But Aussie’s labour market has recovered strongly and its wages are moving along nicely while New Zealand continues to lose jobs and wages stagnate.

Sure enough, emigration to Aussie is on the rise again. Just one more promise that Key couldn’t keep. 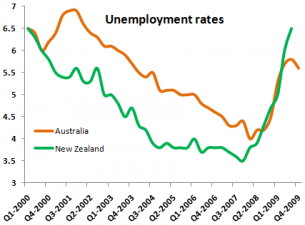 So why didn’t tax cuts solve the problem? Because tax cuts don’t matter. People don’t know how much tax they pay and tax cuts make a one-off minor increase to net income. They simply cannot compete with wages as a driver of behaviour. People were never going to Aussie because of taxes, they were going to better pay (and better weather).

As we’ve been saying all along, it’s a cyclical thing. When Kiwis are confident about their jobs here and see Aussie doing well, they take a punt on going over. When conditions are bad there, they stay at home. Now, conditions are bad here and good there, and Kiwis are heading over again.