Someone told me the other day that Aaron Gilmore is a lowly National list MP. I didn’t believe them – but it is true! Way down on the National party list and today dropped out of parliament by the specials. It was like a blast of icewater in the face – and I still don’t really believe it.

Before that, the only person I’d known and fallen under the spell of was the godlike being of the Aaron Gilmore for Prime Minister facebook page. Sure someone said that that it was a spoof page. But it was just a journo, so what would they know. After all they they even tried to tell tell us the Don Brash was a viable Prime Minister in 2005 and that Winston Peters was finished in politics after 2008.

The gentle divine wisdom of Aaron Gilmore, Prime Minister in waiting with the blessed interpretation by his worshipful acolytes was something to behold. But evidently they did not. 🙁 The final message (at the time of posting) is shown below. 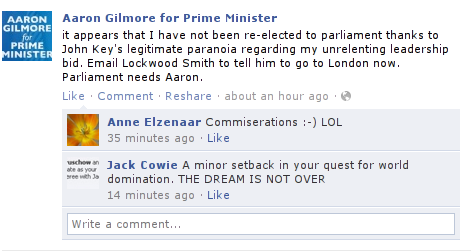 How could others not see it… I have taken some snapshots of the Aaron wisdom for all to see. So in no particular order.. 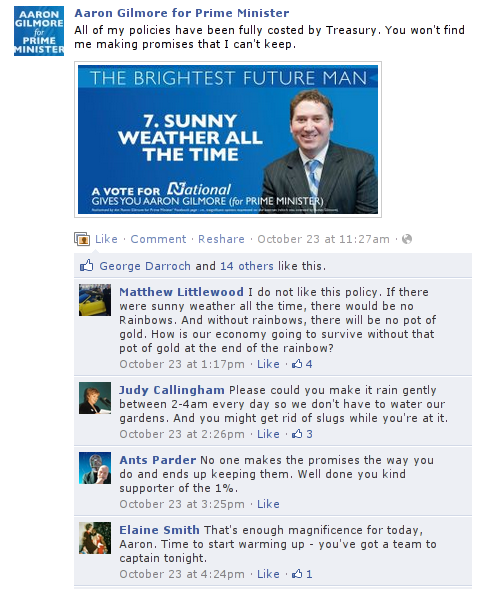 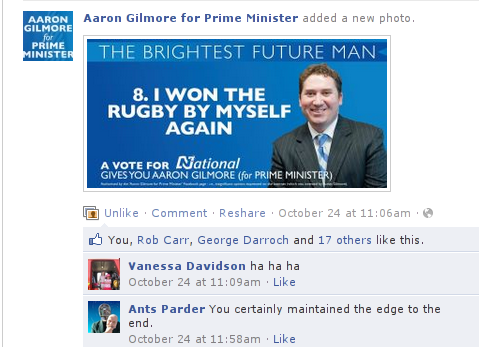 But no-one heeded the blessed ones call over the last weeks to take affirmative action to rectify horrible result. Alas the dream is gone.

Damn I need a bath after writing that cloying crap. Danyl is sooo much better than I am at this. I guess he has a much more acid personality to keep the bloody goo off.