I got it wrong: tax cuts for rich even bigger

Last week, I ran the numbers from the leak of the Government’s tax reforms (the Government isn’t investigating the source of the leak, confirming its truth).

I found that people on low incomes and middle incomes were slightly better off (anything between zero and $3 a week) if you didn’t count the fact their rents are going to go up. People on high wages – $50-$80K – were worse off and then the effect of the big tax rate cut from 38% to 33% kicked in and those few on the highest incomes raked it in.

I went back and re-did my figures. Here are the results: 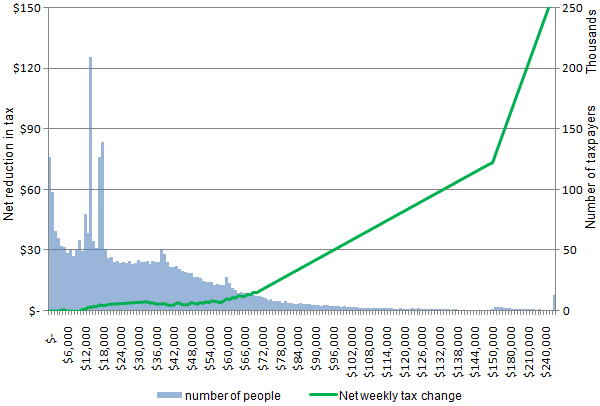 There’s actually no tax cut for the 1.1 million taxpayers with incomes under $14,000. The cut in the bottom rate is eaten by the higher GST bill. Sorry if I got your hopes up for a couple of bucks a week. I hope you haven’t spent it already.

The first 50% of taxpayers get an average of $1.25 a week between them. And many of will be facing higher rents on top of that.

Better news for all you policy analysts and middle management types. The lower increase in your GST bill as a % of your income means you do get a net tax cut after all. As much as the princely sum of $8 a week for someone on $65,000.

The wealthiest 13,000 taxpayers get a quarter of a billion in tax cuts between them – nearly $20,000 a year each – and more than 2.4 million other taxpayers combined.

This ‘tax reform’ package is really a mask for a wealth grab from the many to the few. The bulk of New Zealanders get little or no net tax cut while facing higher rents. Meanwhile, the elite make of with truckloads of dosh.

Correctly calculated, the tax package is more expensive too. It costs $1.2 billion in excess of the additional GST revenue.

National promised that the reforms will be revenue neutral. But they’re got a $1.2 billion hole to fill and Treasury announcing that closing off of the property investment incentives won’t bring in as much money as previously thought.

I wonder which will be scrapped: the cut to the bottom tax rate or the promise to make the reforms revenue neutral?

[a hattip to my old friend who pointed out my error]

100 comments on “I got it wrong: tax cuts for rich even bigger ”