Only a quarter of the world’s workers have permanent jobs. A worldwide trend away from secure jobs risked “perpetuating a vicious circle of weak global demand and slow job creation” that has dogged many countries since the crisis, the UN agency said. 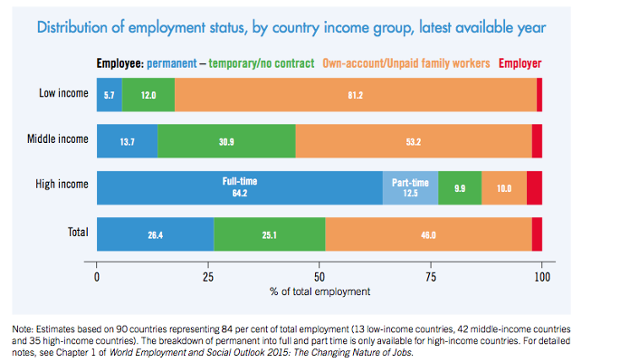 You can read the summary report here. Among other things it says:

A worldwide trend away from secure jobs risked “perpetuating a vicious circle of weak global demand and slow job creation” that has dogged many countries since the crisis, the UN agency said.

The ongoing transformation in the employment relationship is having important economic and social
repercussions. It contributes to the growing divergence between labour incomes and productivity,
with the latter growing faster than wages in much of the world. This, in turn, has resulted in a
shortage of aggregate demand that has stubbornly persisted throughout the years since the crisis.
This report estimates the loss in global demand at $3.7 trillion as a result of unemployment, lagging
labour incomes and their effects on consumption, investment and government revenue.

In addition, the change in the employment relationship may be fuelling income inequalities
(Chapter 2). Although the evidence is mixed across countries, on average the standard form of
employment is better remunerated than other types of work – and the gap has tended to widen over
the past decade. Temporary and informal workers, part-time workers and unpaid family workers,
many of whom are women, are also disproportionately affected by poverty and social exclusion.

$3.7 trillion loss of demand is serious money. The report suggests:

As a consequence, public policies should not focus solely on promoting transitions from nonstandard
arrangements to permanent, full-time, dependent employment. Consideration should
also be given to ensure that adequate protection is in place for workers in all types of employment.

Existing regulations should be revisited to take into account the changing patterns of work. As shown in the report, a number of countries have made substantial progress in this regard and offer possible blueprints for that progress. through measures such as creating new contributory categories, simplifying registration and tax collection processes and subsidizing contributions to social protection systems. For instance, in Argentina, Brazil, China and South Africa, innovative forms of social protection have helped to improve income security for workers in vulnerable employment situations.

Plenty of ammunition here for Labour’s “Future of Work” study. And for thought and debate on the way to the final revelation of its policy.