ImperatorFish: A Day In The Life Of Paula Bennett

Scott at Imperator Fish has kindly given us permission to syndicate posts from his blog – the original of these posts here and here. 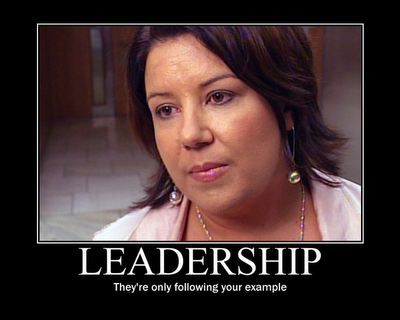 So John Tamihere wants to stand against me in Waitakere. Well good luck to him, I say, because the people of Waitakere adore me. I’m constantly astonished whenever I go walking about in Henderson at the number of people who honk their car horns, shake their fists, or start yelling at me. It’s nice to know they’re so vocal in their support.

People accuse me of not caring. But it hurts when they say such things, really it does. Hey, I’ve been there and done that, and I know how hard it can be. But look where I ended up. Who would have guessed a solo mum Westie chick would end up as a Minister of the Crown? I tell people who are down and out that if they work hard then they too can one day be in a position to take away from others the entitlements they had.

I tripped over as I was walking in the carpark to my electorate office, and the bundle of papers I was carrying ended up on the ground. A member of the public rushed over to help me, but I don’t bear him any ill-will.

Joining LinkedIn was a big mistake. Now I’m being asked to connect with all sorts of people I’ve never even heard of. Who the heck is Ian McKelvie?

I asked for a cappuccino, not a latte! It’s totally unacceptable that I am being treated this way by café staff. Let’s see how they like having all their financial records released to the public. I’m sorry if that sounds a little drastic, but they made the decision to serve me the wrong coffee.

Called Peter to find out if I could get their IRD records. He burbled something about tax secrecy. God, he’s a boring old man.

I’m really concerned about the plight of our young people. Life is difficult for them, and so many of them are without work. But we’re doing our best to help them, by making it harder for them to get benefits, imposing tighter conditions on their spending, reducing their incomes by introducing youth wages, and making it easier for employers to fire them at will. It’s tough medicine, but I have no doubt they will thank us in the end for motivating them to move to Australia.

Got home to find the wind had blown over my Sky TV dish, leaving it dangling precariously  I got on the phone and told Sky TV to send someone over straight away, because I couldn’t afford to miss The Ridges, but they told me all their service-people were busy. Anyway, a guy eventually turned up and was just about to climb his ladder onto my roof when I ran outside and said “what do you think you’re doing?” I ripped the ladder away from him and told him I was keeping it. I’ve got quite a collection of ladders in the garage. Then he started having a go at me, saying he couldn’t do his job without the ladder. I said to him “You can’t talk to me like that. Don’t you know who I am?” “I know who you are, Mrs Shipley,” he said. “Now give me back my bloody ladder!” I told him to piss off. The cheek of the man!

I assured the media today that I have not seen anyone in this government taking a cavalier attitude towards the privacy of others. It’s why I had all the mirrors in my house removed.

25 comments on “ImperatorFish: A Day In The Life Of Paula Bennett ”