ImperatorFish: Arrest of The Environment ends campaign of terror against businesses 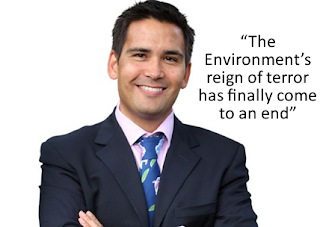 The Environment was today arrested by police, after frustrating business groups for a number of years.

Police moved against The Environment following a tip-off from a concerned member of the public.

The Environment had been in hiding since legislation making environmentalism unlawful was passed by the government.

Minister for Expending Energy and Resources to Change the Climate, Simon Bridges, said the capture of The Environment was good news for the people of New Zealand.

“The Environment’s reign of terror has finally come to an end”, said Mr Bridges. “Now people can go about their lawful business polluting our waterways, destroying our pristine landscapes, and imposing monstrous sprawl upon our biggest cities, without the need to consider The Environment.”

He said that destroying native forests, obliterating green spaces, and laying waste to our entire nation in a slow and methodical manner would be “real wins for business”.

A spokesperson for The Environment denounced the arrest, but refused to comment further for fear that an oil company would seek legislation to criminalise her organisation.

9 comments on “ImperatorFish: Arrest of The Environment ends campaign of terror against businesses ”