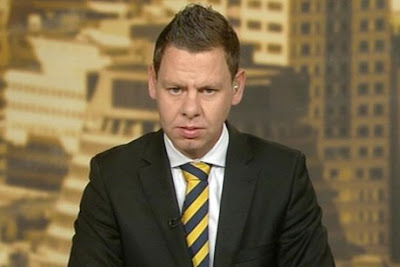 3 News Political Editor Patrick Gower has been put on notice that his performance must improve if he is to keep his job.

A member of 3 News’ political reporting team told 3 News yesterday that Gower had two months to improve his performance.

Questions have been raised about Gower’s leadership style ever since he took over as political editor from Duncan Garner.

One person inside the 3 News camp has accused Gower of being “tight”, and of failing to motivate his colleagues.

The journalist, speaking on condition of anonymity, said: “the team is just really flat and unmotivated. Whenever we have a team gathering to celebrate a great story it’s always instant coffee and wine biscuits.

“We’ve told him we want something nicer. God, even a sandwich would be an improvement. But Gower is just so tight. I’m not even sure whether he eats.”

The journalist said that his colleagues had almost run out of patience with Gower.

“I give Paddy a couple more months. I’m talking to his bosses about his performance at the moment, and I reckon we could see a change before the end of the year if he doesn’t buck up his ideas.”

Gower’s transition to the political editor role has not been an easy one.

The departure of Duncan Garner and the recent receivership of MediaWorks have strained nerves within the 3 News team, and 3 News continues to trail in the TV ratings against One News.

It is understood that Gower is still in contact with Garner, and that Garner may be offering support and advice to Gower.

“We send each other texts occasionally,” Gower has previously admitted. “But I’m my own leader.”

Gower has also appeared preoccupied with uncovering scandals and chasing MPs down building corridors, and has failed to tackle the important business of keeping everyone in the office moderately contented.

Some within TV3 fear an ugly and bloody battle between Tova O’Brien and Brook Sabin for leadership of the 3 News political reporting team, should Gower be forced aside.

But the journalist who spoke to 3 News is not a member of either faction.

Gower told 3 News last night that he was not concerned about questions surrounding his leadership, or the failure of 3 News to move ahead of One News in the ratings.

“Look, I’m confident I’ll still be here for the 2014 election,” Gower said. “Nobody in the team has said anything to me about any trouble.”

Reporter Brook Sabin has also claimed that he knows nothing about any challenge to Gower’s leadership.

“Obviously if the position became available I would have to assess where I stood on the issue,” said Sabin.

“But right now I’m happy just being a political reporter.”

Tova O’Brien failed to return any of 3 News’ calls.

25 comments on “ImperatorFish: Patrick Gower put on notice by colleagues ”