In praise of collective bargaining

One of the great myths of Right wing politics is the worship of the individual over the community / collective.  The “rugged individual”, the “loner”, the “maverick”, “Atlas Shrugged” type “wealth creators” and so on.  It’s ignorant at best, an active lie at worst, and always an appeal to vanity and ego. But there’s no denying that it’s also a very powerful and useful political meme.

One use of the loner meme has been as a tool in the attack on collective bargaining – on unions.  A previous Nat government gave us the widely hated Employment Contracts Act (ECA), which abolished collective bargaining.  One of the lies used to sell the ECA was that negotiating directly with the employer would “empower” the individual worker and allow them to get better wages and conditions.  Yeah right. The last Labour government replaced that with the ECA with the Employment Relations Act (ERA), which dealt with the worst aspects, but left the possibility of individual contracts for workers in place.

So how are those individual contracts working out?  Not so good:

Workers close to entering management ranks are being warned to carefully consider their employment agreements – they risk earning less if they don’t compare collective and individual contract employment rates. …

Fred Adelhelm, of Adelhelm & Associates … have worked with 72 of New Zealand’s largest employers. They say increasing numbers of workers, and employers, are noticing a “pay-curve headache” – where talented staff moving off wages on to individual employment agreements (IEAs) can fall behind. Employers need to avoid these problems to stop disharmony in the workplace, they say.

Adelhelm says highly specialised staff who move into first-in-line relieving management positions can drop up to 5 per cent behind their colleagues in earnings if they move to individual contracts without careful consideration. As salaried staff they give up the allowances that a collective entitles them to and sometimes rises in base rates don’t compensate for that loss.

Here’s another part of the puzzle from Marty G’s great post at the start of the year on the difference in wage increases for unionised vs non-unionised workers: 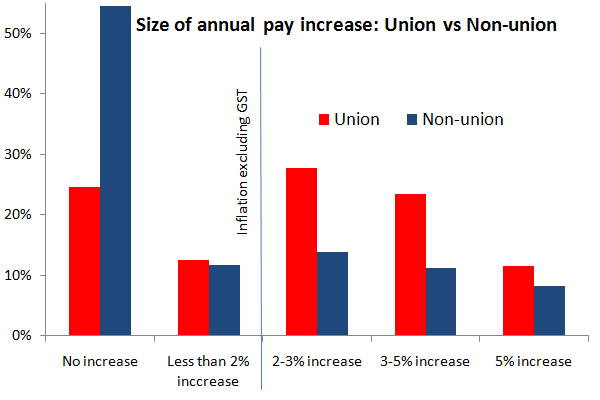 So never mind the loner rhetoric. Turns out that “No man is an Island”.  In general you’ll have better wages and conditions with a unionised workforce and a collective contract.  No wonder the Nats hate unions.

75 comments on “In praise of collective bargaining ”