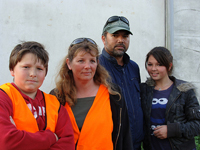 Last week the Employment Court decided that Talleys-owned Open Country was acting illegally in locking out its unionised staff. The Court upheld the right of workers to demand a collective agreement and stated it was illegal for the Talleys to lock them out rather than attempt collective negiotations.

Despite this, the lockout continues and the National Government stands by and allows their friends the Talleys to openly flout the law. Of course, there’s no suggestion at all that the National Party’s deep links with this company have anything to do with their refusal to act.

Worringly, the Court also decided it was OK for Open Country to use strike-breaking labour hired by a sham contracting agency specifically set up to get around strike-breaking laws. The union is looking at appealing the decision, which can’t stand up to any serious challenge because it effectively nullifies the bargaining power of workers if the bosses are allowed to hire strike-breakers.

The company has also started systematically sacking leaders of the unionised workers on spurious grounds to try to break them. It fails to realise these are real people, many of them related from the same small town. They’re not going to turn their backs on their mates, the guys they have to see down the pub each week, and side with the bloody Talleys.

Open Country is now stepping up their intimidation even further, threatening a major restructure to try and cow the workers into submission.