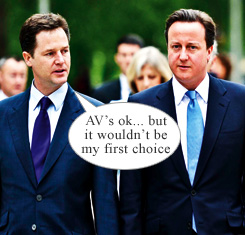 Results are coming in for council elections in England and for the Welsh and Scottish Assemblies. The most interesting result will be the referendum on Alternative Vote for the whole  UK. It is likely to go down according to the polls. David Cameron came out strongly against it. He gained support from his backbench but there will be fallout for his coalition with the Liberal Democrats. The AV referendum was  their main reason for going into coalition.

Lord Ashdown has led the LibDem backlash against Cameron. As for the Tory backbench support, this comment perhaps sums up why things will not be smooth from here on:

One minister said: “It is naive to say that David should not have gone out and campaigned against a crappy electoral system that is a threat to our jugular. This shows what a superb political leader he is. The Lib Dems are duplicitous toerags, though I have to say they are very good ministerial colleagues.”

The Tories also aim to cut the number of seats under FPP, which will no doubt be a rural gerrymander. Ed Miliband supported Alternative Vote, which means he is taking a long view. Blair’s rejection of proportional representation early in the last Labour government was a crucial mistake in my view.

The Scottish Parliamentary election will also be interesting, with the Scottish Nationalists doing well at Labour’s expense.

15 comments on “Interesting election May 5 ”