Many have commented that John Key dodges all the hard questions in favour of scripted photo-ops. But 3 News reminded us that his MPs are just as bad. In fact, although Key’s face is everywhere, the rest of the Nats are working hard at being invisible. Let’s bring a little sunlight into that darkness, and remind ourselves just who we’d be re-electing along with the Dear Leader. 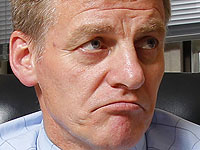 Infamous for leading the Nats to their worst ever election result, 21% in 2002, and rolled as leader shortly thereafter by none other than Don Brash.

In this term as Deputy PM and Minister of Finance the main thing that he has enriched is himself.  Mr Double Dipton appears to have been given special treatment to allow him to pocket $32,000 dollars as a housing allowance for living in his Wellington home while claiming to live in his Clutha-Southland electorate.  He got caught out and the public outcry forced him to pay the money back (whining all the while that “the system” had failed him).  But it’s the attention to detail that really impresses.  English made sure he took time out of his busy schedule of watching the invisible hand to do the paperwork for an extra $20 per week house cleaning expenses.  Nice one.

Arguably the worst Minister of Finance ever, English has presided over three years of derisory growth, a 50% jump in unemployment, record inflation, a growing wage gap with Australia, record emigration to Australia, an extra $1.1 Billion in borrowing to pay for supposedly “fiscally neutral” tax cuts, and a double credit downgrade as an international vote of no confidence.