I regard the invasion of Iraq as one of the most shameful events in America’s history. The made up cover story about “weapons of mass destruction” was quickly shown to be a lie. It was always about the oil. And for too many of those on the ground it was always about lining their pockets with billions of dollars worth of slush money. Some of this is old news, from 2007:

How the US sent $12bn in cash to Iraq. And watched it vanish 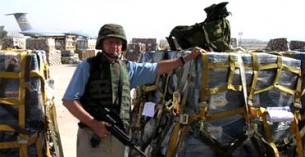 The US flew nearly $12bn in shrink-wrapped $100 bills into Iraq, then distributed the cash with no proper control over who was receiving it and how it was being spent. The staggering scale of the biggest transfer of cash in the history of the Federal Reserve has been graphically laid bare by a US congressional committee. …

“One CPA official described an environment awash in $100 bills,” the memorandum says. “One contractor received a $2m payment in a duffel bag stuffed with shrink-wrapped bundles of currency. Auditors discovered that the key to a vault was kept in an unsecured backpack.

“They also found that $774,300 in cash had been stolen from one division’s vault. Cash payments were made from the back of a pickup truck, and cash was stored in unguarded sacks in Iraqi ministry offices. One official was given $6.75m in cash, and was ordered to spend it in one week before the interim Iraqi government took control of Iraqi funds.”

The minutes from a May 2004 CPA meeting reveal “a single disbursement of $500m in security funding labelled merely ‘TBD’, meaning ‘to be determined’.”

The memorandum concludes: “Many of the funds appear to have been lost to corruption and waste … thousands of ‘ghost employees’ were receiving pay cheques from Iraqi ministries under the CPA’s control. Some of the funds could have enriched both criminals and insurgents fighting the United States.

But a recent report has just highlighted another part of the picture:

Billions have gone to rebuild Iraq but much of the money is impossible to trace, says a US audit 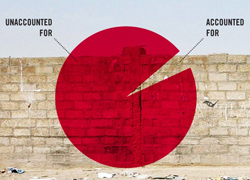 A US federal watchdog has criticised the US military for failing to account properly for billions of dollars it received to help rebuild Iraq.

The Special Inspector General for Iraq Reconstruction says the US Department of Defence is unable to account properly for 96% of the money. Out of just over $9bn (£5.8bn), $8.7bn is unaccounted for, the inspector says.

The US military said the funds were not necessarily missing, but that spending records might have been archived. In a response attached to the report, it said attempting to account for the money might require “significant archival retrieval efforts”. …

The funds are separate from the $53bn allocated by the US Congress for rebuilding Iraq. Much of the money came from the sale of Iraqi oil and gas, and some frozen Saddam Hussein-era assets were also sold off. The money was in a special fund administered by the US Department of Defense, the Development Fund for Iraq (DFI), and was earmarked for reconstruction projects. But the report says that a lack of proper accounting and poor oversight makes it impossible to say exactly what happened to most of it. …