The current incumbent in the White House is an unusual person, even when compared to other right wing American politicians.

He lacks even a basic sense of humanity.  And his approach to all issues is that superficial it can be captured in a tweet.

Exhibit A are his recent tweets following the terrorist attack on London.  Including this one:

Do you notice we are not having a gun debate right now? That's because they used knives and a truck!

Then Trump chose to attack Labour London Mayor, Sadiq Khan, who is also a Muslim.

At least 7 dead and 48 wounded in terror attack and Mayor of London says there is "no reason to be alarmed!"

The context of Khan’s statement is contained in this article in the Independent:

But Mr Trump’s criticism is based on a quotation entirely removed from its context. He appears to be confused about what happened in part because Fox News repeated the same short quote but without the full remarks from the mayor of London.

What Mr Khan actually said was that there is no reason to be alarmed about the increased police presence on the streets after the attack.

“My message to Londoners and visitors to our great city is to be calm and vigilant today,” Mr Khan said. “You will see an increased police presence today, including armed officers and uniformed officers.

“There is no reason to be alarmed by this. We are the safest global city in the world. You saw last night as a consequence of our planning, our preparation, the rehearsals that take place, the swift response from the emergency services tackling the terrorists and also helping the injured.”

Get that?  Khan was assuring people not to be alarmed about increased police numbers, not about terrorism itself.

I am sure this was pointed out to Trump.  So how did he respond?  Not well …

Pathetic excuse by London Mayor Sadiq Khan who had to think fast on his "no reason to be alarmed" statement. MSM is working hard to sell it!

Defending Fox News seems to be of more importance to Trump than maintaining international relations with one of America’s oldest friends as well as one of the permanent members of the United Nations Security Council.

On Morning Report yesterday morning Simon Marks called the action unprecedented.  Have a listen to it.  I am not sure I have ever heard a reporter described the POTUS in such trenchant terms.

This is the sort of behaviour you would expect from someone in Primary School, not the President of the United States and the former leader of the free world. And sticking to an interpretation which is clearly wrong shows a level of belligerence and lack of sophistication that is terrifying.

I posted some English responses earlier this week.  They deserve repeating:

Even the acting US Ambassador in London disagreed with the POTUS.

I commend the strong leadership of the @MayorofLondon as he leads the city forward after this heinous attack. – LLukens 3/3 https://t.co/p4dDZuCpyO

And this has caused more controversy.  From the Guardian:

In more normal times, such a message of solidarity with a host mayor in an allied state would be unremarkable, but it unleashed a torrent of online abuse from Trump’s supporters, accusing Lukens of disloyalty. Some focused on the fact that the acting ambassador was offering support for a foreign official who is Muslim, rather than echoing the president. There were calls for Lukens to be replaced.

You have to wonder why Trump chose to attack the Mayor of London and not the Mayor of Manchester.  Could this be the reason?

Khan has taken the opportunity to oppose the planned State visit by Trump to England.  As well he may.

Theresa May must be willing Trump to STFU. And she must be deeply regretting the closeness of their relationship … 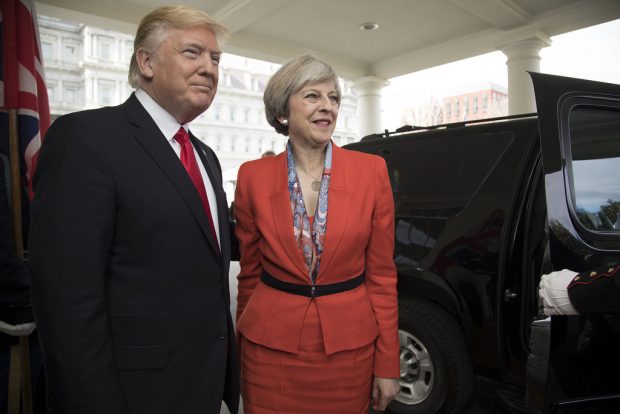 17 comments on “Is Donald Trump helping Jeremy Corbyn get elected? ”