Is New Zealand really as ‘racist as fuck’?

I think it is interesting that during his spiel, Garner attempts to draw attention to what he views as real racism – i.e. “that’s South Africa under apartheid”. In essence he is trying to negate Taika’s opinion that New Zealand is as “racist as fuck”.  Similar comparisons are made between relative and absolute poverty so that people can deny that poverty exists in our own context. In my opinion Garner is doing just that, he is denying racism exists in New Zealand by making comparisons with countries and circumstances that have more extreme and overt forms of racism than our own brand of racism.

Garner goes on to try to normalise racism when he states “If we’re honest with ourselves, we’re all a little bit racist”. What the fuck does that even mean? Does that mean that if we normalise racism by imbuing everyone with this quality, we can then be more overt with our racism or deny that racism is harmful because we’re all “a little bit racist”?

Both Garner and Richardson, while completely discounting Taika’s view point and experiences, both go on to label him. For example, “he’s too extreme, lighten up and change the record”, implying  that Taika is over reacting, and because he voiced his opinion he’s now ‘too extreme’ – or going on and on. I can’t help but feel this is Garner’s message to all Maori, “we’ve heard it all before, time to stop nagging aye”. A complete whitewash of Maori perspectives and experiences. If they’ve heard it all before, then clearly the message isn’t getting through! Of course, and not surprisingly Mark Richardson is less eloquent, using terms like ‘dickhead…nob…clown’ to describe Taika’s description of our racism. Naturally this type of labelling is designed to chastise the wayward native for his comments.

One doesn’t need to go far to see the impact of the systemic racism that plagues this country.  Can anyone believe that we’re still debating whether the indigenous language of this country should be compulsory in schools?   Or that teaching children about the land wars is up to individual schools? 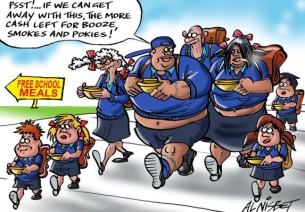 Is New Zealand as racist as fuck? I believe it is, and I believe evidence of this can be gained by listening to the diatribe of people like Duncan Garner and Mark Richardson, reading comment sections in MSM and the negative statistic that plague Maori and other minority groups in New Zealand.  New Zealand’s racism is evident when Maori are constantly treated like the ‘other’ and Maori culture and language is viewed as an ‘add on’ rather than a normal part of our lives, for example Maori language week when schools, government departments businesses and NGOs, etc all decide to pay homage to tick their Tiriti cultural box.  So yes, I agree with Taika Waititi, New Zealand is as “racist as fuck”!

85 comments on “Is New Zealand really as ‘racist as fuck’? ”