It is National’s time for the brown trousers

If you want to know why the right is farting so much personal smoke, why David Farrar appears to now be panicking over at Kiwiblog, and why our old trolls appear to have suddenly awoken from their somnolent state at the sewer and started re-appearing here to the irritation of our moderators.

But swordfish has an good explanation in comments. He has also put in the links in this comment.

Lets look at swordfish’s numbers in a couple of public polls. I’ve tidied it up a little..

Of course this doesn’t paint the quite the whole picture. But for the purposes of electoral success it hardly matters for most of the remaining tiddler parties. There used to be a number of smaller parties that were also polling OK in those older polls. None of whom seem to be polling much these days.

Act and United Future seem to have become electorate client puppets of National. The Maori party is clinging on to their one seat by their fraying fingernails and appear to have no hope of cracking 5%. Even the new party of the block – TOP – appears to have little chance at either a seat or 5% as they are currently polling at less than 2%.

Like carnivorous spider with a short-term perspective about future prey, National appear to have squeezed the life out out of their possible coalition partners. Unless they do some kind of evil empire deal with NZ First, who they tried to demonise and kill off in 2008, they can’t win the treasury benches. If they do, then the residual demonising effect is likely to cause both parties considerable indigestion issues.

Sure the Greens just took a hit. But I suspect that they are just going to recover quite nicely now that they have raised the issues that causes the non-polled to get active (it has certainly made me more interested in voting for them). And Labour is likely to catch some of that benefit as well from those who are more cautious than I am.

But it isn’t hard to see why National and their dirty politics subsidiaries are worried. The trends are against them and appear to be getting worse.

It probably also explains why I’m having to watch my core temperatures  and fan speeds as the volumes of pageviews, comments, a our moderator irritation levels rise to unprecedented levels such a long way out from the election. But sysops of political blogs tend to see politics from a rather different perspective. 😈

It looks like this. While the numbers tend to be small compared to the national media websites, they are pretty damn high when you consider that this site has a monthly operational cost of $134 per month (feel free to donate). 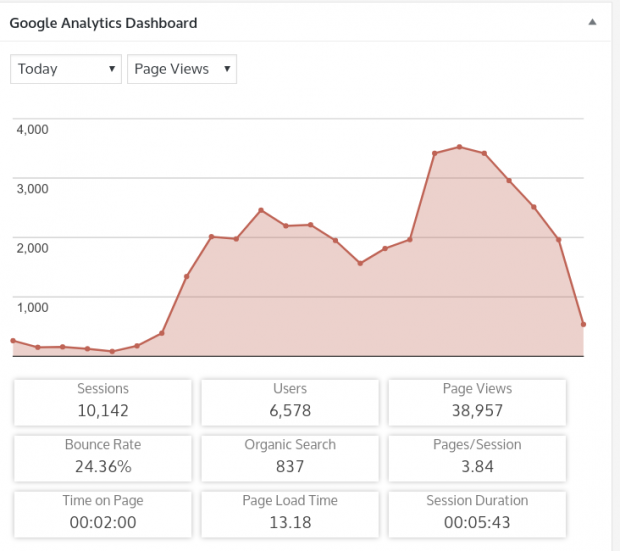 And causes this (when I arrived home tonight) and looked at the CPU temperatures.

It caused me to do some rapid shifts in the fan and pump/radiator response heuristics. The trade offs between having a quiet apartment and a functioning webserver tend to be somewhat tricky.