It’s not spin, the govt told me

The Dompost reports: “The number of places available on a programme to get young people off the dole will be increased after the Government credited it with a drop in unemployment”. Sigh, it’s the seasons, stupid. 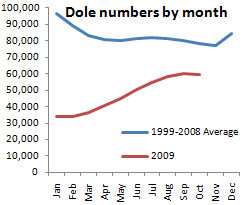 There has been no drop in unemployment, that went up to 6.5% in the last stats. The number of people on the dole has dropped but that is due to the normal seasonal pattern.

It is being taken as some kind of achievement that dole numbers haven’t hit Treasury’s worst-case scenario. Well whoopie. But remember the number on the dole is only a fraction (not a constant fraction) of those who want jobs but can’t get them. Call me old-fashioned but I don’t think a quarter of a million jobless is anything to gloat over.

Contrary to National’s spin as repeated in the Dom, it has nothing to do with National’s ‘job ops’ scheme. All that has done is encourage employers to hire young people rather than older ones and it has barely made a difference in that – youth unemployment is over 25%.

If I were falling for such transparant spin, I would be embarrassed, but there you have a major newspaper mindlessly repeating it.