Jackal: A coalition with Winston Peters

I’m not sure how to break the news to all those desperate right wingers out there wanting the NZ First party to form a coalition government with National, but, despite the mainstream medias misleading coverage, it doesn’t look like a realistic scenario at all. 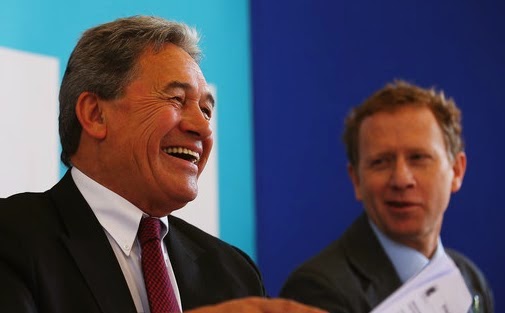 It appears that on current polling, and without Winston Peters’ help, National’s dreams for a third term in power look set to be dashed against the rocks of public opinion.

Never say never though so let’s go back in time a bit and revise some history showing why it’s highly unlikely Peters will get into bed with the political contortion artist, John Key:

On January 22, One News reported:

Asked if he could hold a ministeral warrant alongside Mr Dunne, Mr Peters said: “This comes down to the country’s leadership. And if a leader has that sort of unprincipled position it would be almost untenable to be able to deal with a government.”

Not working with Peter Dunne appears to be a bottom line for Winston.

Peters calls Key’s administration a “tin pot military dictatorship” for trying to jack up the election. Nice! He was clearly still pissed off about the smear campaign that the right wing had been running against him, a smear campaign likely orchestrated directly by the National party itself.

Of course Peters was eventually cleared of any wrongdoing, but by then the damage was done. What I’m trying to say is that the National party and their attack bloggers Dirty Politics won’t have been forgotten by Winston Peters.

However, what about John Key’s thoughts on Winston Peters? Is there any room for the corrupt PM to wriggle his way back into power?

On February 2011, the NZ Herald reported:

Mr Key said although it could cost National the election, he would not work with Mr Peters. It was up to voters to decide who they wanted in government and he wanted his position to be clear.

“If Winston Peters holds the balance of power it will be a Phil Goff-led Labour government.”

“I want to lead an aspirational Government, I don’t believe a Winston Peters Government does that.”

“I’m about tomorrow – not yesterday.”

I guess that was all about getting voters to not support NZ First in the hope they would instead support National, so obviously the wily old fox was a bit pissed off about that as well. He was however rather diplomatic on that occasion concerning John Keys’ insults:

“New Zealanders don’t take kindly to being told what they’ve got to do, particularly when they’re the masters come election day.”

John Key was amused that NZ First supporters were dying. This clearly shows he has no principles, which, despite his previous criticism, is why the PM is now giving the glad eye to Winston Peters.

Personally I don’t think Peters will have a bar of it. Not just because those who continue to support NZ First because of the teapot tape scandal would look elsewhere, but because of his other bottom lines.

On September 10, Tim Watkin over at Pundit reported:

But let’s not pretend Peters has only just started positioning himself. I’ve been keeping a running tally of Peters’ “bottom lines” this year, and they are:

New Zealand First won’t work in a coalition with a “race-based party”.

New Zealand First will block the sale of Lochinver Station (“we would not allow this deal”), demands a register of land sales to non-New Zealanders and further, “we will not go into any arrangement with any party that thinks they can go on doing this [foreign land sales]. That’s it.”

New Zealand First could not offer even confidence and supply to a party that didn’t agree to a royal commission into the Dirty Politics allegations.

New Zealand First insists on a state asset buy-back programme that begins now, not in years to come. More specifically, he has a bottom line that the power companies part-sold last year must be bought back. “If either side prefers to sell out New Zealand’s long-term heritage, then they can line up and find their own support”.

New Zealand First says generally immigration must come down, and specifically that new migrants must move into the regions for up to five years. That’s also a bottom line, Peters has said.

Clearly the National party isn’t going to agree to at least half of those conditions and Winston is unlikely to compromise, which would rule out any type of coalition deal with NZ First.

In my opinion, Winston Peters has a lot to lose if he makes a deal with Key and everything to gain if he makes a deal with Cunnliffe. The political divide between NZ First and Labour is a lot less pronounced than with National. Also, with compromises to policy likely to be acceptable to their supporters, a coalition between NZ First and Labour looks like a workable solution.

A Labour led government with NZ First on the right and the Green party on the left would be a very stable and moderate administration dedicated to all the things that New Zealanders believe in. Far from being an uncontrollable multi-headed hydra, Labour and their coalition partners would bring years of experience and newfound enthusiasm to the table.

The only real question is who’s going to be Deputy Prime Minister?

lprent: The results of a series of Horizon online polls would also appear to make it a party losing proposition to support National.

A new HorizonPoll finds 58.8% of those intending to give their party vote to New Zealand First would prefer Labour to lead a coalition government if one is needed after the election.

41.2% would prefer a National-led coalition.

67% of those who voted for New Zealand First at the 2011 general election would prefer Labour to lead a coalition government if one is needed after September 20’s general election.

The majority preference for a change of Government among the party’s voters underscores the “difficult” decision making party leader Winston Peters says he will face.

When I went to the NZ First conference in mid-July as ‘media’, I was struck by the distaste that many delegates had for John Key and National both on the remit floor and privately. They actually reminded me in many ways of the conservative delegates from a Labour conference.

79 comments on “Jackal: A coalition with Winston Peters ”