James Shaw Speech to the Green’s conference – Greening the Government 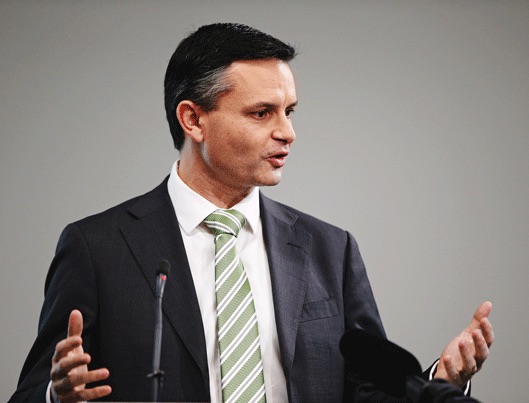 Text of the prepared speech delivered today by James Shaw to the Green Party conference.

Two days ago, we heard the news that a block of ice had broken away from the Larsen C ice shelf in Antarctica.

Now, blocks of ice break away from Antarctica all the time.

But this wasn’t just any old iceblock.

This was a 5,800 square kilometre iceblock that weighs a trillion tonnes.

To give you a sense of perspective, that’s about a thousand square kilometres larger than the Auckland Supercity.

Imagine driving from Huntly to Mangawhai Heads, on an open road, with no traffic – actually, just imagine that, for a moment! Julie Anne Genter for Minister of Transport! – that trip will take you about two hours.

In your electric car.

That’s how big this iceblock is.

It is the start of the breakup of the Larsen C iceshelf.

After that it’ll be time up for the West Antarctic iceshelf, which holds the equivalent of about 3.3 metres of sea level rise.

The Reverend Dr. Martin Luther King, Jr., said that, “We are now faced with the fact that tomorrow is today. We are confronted with the fierce urgency of now. In this unfolding conundrum of life and history, there “is” such a thing as being too late. This is no time for apathy or complacency.”

Paula Bennett, on the other hand, says that we here in New Zealand are playing our part. That we are on the right track.

She cites research into new technology, aid to the Pacific Islands, and a review of the Emissions Trading Scheme, as signs of her Government’s commitment to tackling climate change.

Well, there is one measure – and one measure only – for whether any country is doing its part.

And that measure is whether our greenhouse gas emissions have risen, or fallen.

And on her Government’s watch, New Zealand’s greenhouse gas emissions have risen 19 percent.

That is a stark betrayal of today’s young people, and of future generations.

It is beyond negligent. It should be criminal. And I’m looking forward to seeing what Sarah Thompson’s court case against the Government has to say about that.

Now, the Government also keeps saying that New Zealand is a small player, that we account for less than one percent of global emissions.

And that is true.

But if you added up all the countries that each account for less than one percent of global emissions, together they add up to 23% of total global emissions – much more than the United States and nearly as much as China.

New Zealand has the fifth highest per capita emissions in the OECD. We outstrip virtually every other industrialised nation.

Of those to whom much is given, much is expected.

The Paris Agreement commits all countries that signed up to it – including New Zealand – to take action to hold global warming to between 1.5 and 2 degrees.

What this means, is that the world needs to get to a net-zero carbon economy sometime in the second half of this Century.

The Paris Agreement also says that developed countries – like New Zealand – should take the lead.

What that means, is that we are responsible for getting to a net-zero carbon economy much closer to 2050 than 2100.

Now, many years ago, former Prime Minister John Key said that he thought New Zealand should not be a leader when it comes to climate change, but a “fast follower”.

This was the same John Key whose campaign slogan was “Ambitious for New Zealand”.

Well, under the National Government, New Zealand is not only not a fast follower, we’re not following at all.

But I believe we ought to lead.

Over the course of the last couple of years, our colleague, Dr Kennedy Graham, has worked assiduously behind the scenes in Parliament to build at least some level of cross-party consensus on climate change.

And he has met with some level of success.

Kennedy established an informal, cross-Parliament, all-party group of 36 MPs. That group then commissioned a report outlining a set of possible pathways and timeframes for New Zealand to get to a net-zero carbon economy.

What’s most significant is that this report found that it is both technically and economically possible for New Zealand to achieve carbon-neutrality by the year 2050.

Therefore, because we can, because we must, because it is right – today, I do commit – and we the Green Party commits – to the goal of making New Zealand carbon-neutral by the year 2050.

The Green Party is the only political party ambitious enough, for New Zealand, to make that commitment.

No other political party will commit to that. We do.

There was once a time when such a goal would have been unthinkable and labelled a dangerous threat to our prosperity.

Well a lot can change in a few years.

Today, it’s very much the people who lack ambition on the climate that pose the greatest threat to our collective prosperity and our national security.

While New Zealand has suffered nine years of inaction on the climate, the low carbon economy is taking shape overseas.

2015 was the first year that more clean energy infrastructure was built than new fossil fuel energy.

Last year, solar and wind power became the same price or cheaper than fossil fuels in more than 30 countries.

And the price continues to fall.

And ‘wind turbine service technicians’ is now the fastest growing job category in the USA.

The energy revolution has begun. It is inevitable. And it will simply continue to accelerate.

But here in New Zealand, National under Bill English and Steven Joyce has continued to frustrate our nation’s ambition and the opportunities for new jobs and value creation.

National continues to subsidise the expansion of dairy and deep sea oil drilling.

And now they want to put a coal mine into a kiwi habitat on conservation land!

National’s lack of ambition means we’re now going to have to spend $10 billion – of our money – over the next 10 years buying international carbon credits to offset our own pollution.

Over the next ten years, New Zealand will send $1 billion a year to other countries to build their low-carbon economies and competitive advantages, and not our own.

Well, the Green Party wants to invest that money here in New Zealand.

We want New Zealand to be one of the first truly sustainable economies in the world, and to show the rest of the world how it’s done.

And we’ll start by building the infrastructure that’s needed for a low-carbon economy.

Earlier this year, Gareth Hughes launched a new energy plan that would get New Zealand to 100% renewable electricity by 2030.

The energy industry applauded him for the kind of leadership and clear policy direction that they need to hit that ambitious target in only 13 years.

And last week Julie Anne Genter launched her plan to get Auckland moving from the Airport to the City by rail, in time the next America’s Cup in 2021.

This is on top of her plan to connect the city to the North Shore by rail and other projects that will increase productivity, cut climate pollution and give Aucklanders a break from the four weeks a year that they spend stuck in traffic – which is as much time as they spend on holiday!

Later on in the campaign we’ll announce other policies and projects that further our goal of creating a productive, jobs-rich, carbon-neutral economy by the year 2050.

But today I’d like to announce the next step in our climate plan.

The Green Party, in government, will establish a Green Infrastructure Fund to accelerate New Zealand’s transition to a greener economy.

The Green Infrastructure Fund will be the Kiwibank of the green economy.

In time, the Fund will help redirect billions of dollars of funding into:

We expect the Fund to secure average returns of around 7-8 percent per year – but more importantly, to reduce New Zealand’s greenhouse gas emissions by a million tonnes a year.

The Fund will cost $10 million to establish in year one and have access to an initial line of credit of $100 million over year two and three.

We will pay for this, at least in the short-term, by raising oil royalty rates from 46 percent to the international average of 70 percent.

And the Fund will be one of my personal economic development priorities as a new Minister in Cabinet, up and running within 12 months of the formation of the new Government.

Not only will the Fund help secure the buy-in and capital available in the private sector to achieve our climate goals, it will help create thousands of good, well-paying jobs in the regions and for Māori.

Many of you will remember that my predecessor, Dr Russel Norman, proposed a green bank in 2014 based on successful precedents in the UK and Australia.

Since then, New Zealand has realised the scale of the infrastructure deficit that we face, after decades of underinvestment and the running down of our assets.

So there is a timely confluence of opportunity that the Green Infrastructure Fund can meet.

Our national rail system is the classic victim of government short-sightedness and an unwillingness on their part to invest in an asset that is now going to be a key long-term driver of economic activity in a carbon-constrained world.

The infrastructure underpinning our housing, tourism, water, energy, health, and education sectors has been in a similar state of decline and will require major new investment if it is to remain fit-for-purpose in the 21st Century.

Now, there will be some who say that our plan is reckless or irresponsible.

Well, let me tell what you what’s reckless or irresponsible.

Irresponsible is to give $10 billion dollars of the country’s wealth away to other countries, asking them to cut their pollution so that we don’t have to.

or the worst storm in sixty years leaves 30,000 Wellingtonians without power and causes $35 million of damage in a single day…

or the worst drought in 70 years wipes $1.5 billion off New Zealand’s agriculture exports…

Reckless, is to alter the chemical composition of the atmosphere and condemn entire nation states to extinction.

The goal we have set – of a net zero carbon economy by 2050 – that’s not just the solution to climate change.

It’s also the greatest economic opportunity in at least a generation.

But under the current government, that opportunity is passing us by.

And the window of opportunity to stop climate change, is closing.

The time for inaction is well past.

The time for excuses is over.

The Green Party is the only party committed to actually doing what it takes to create a society and an economy that reflects the scientific facts of climate change.

We are the only party that will make climate change a top priority for Government.

And that is why I am here.

We will not be deterred by denialists or cynics or those who mutter silky words about what’s realistic or too radical.

We will not be deterred.

We are closer to being able to do this than we ever have been before.

Let’s get to work.

It is time to change the Government – and change is coming.

Let’s get it done