Jarrod Gilbert is tilting at windmills

Is Jarrod Gilbert’s call for an end to the gradual crushing of academic research in New Zealand quixotic? Probably.

Looking specifically at academic research into crime data, the rot began in 2008. The National Ltd™’s Crosby Textor election campaign essentially exploited the unfortunate fact that most voters are driven by emotion rather than rationality. All sorts of despicable tactics were used and among the most successful was the manufacturing of fear. To this end, the ideological branch of National Ltd™, the ACT Party, was employed to fabricate the idea that all New Zealanders were at serious risk from ever increasing violent crime unless they voted National Ltd™.

Several horrible crimes in the lead up to the 2008 election were thoroughly exploited for shock, especially within the Asian community. Neck minit, astroturf groups were marching in the streets, the MSM was pumping out wall to wall shock horror headlines, and National Ltd™ was pounding the “get tough of crims” drum. It worked.

Obviously, then, once elected, National Ltd™ had to be seen to be doing something about the appalling crime rate. Up steps its first Minister of Police, Judith “Oravida Ancient Kauri Exports” Collins, and she had a neat little trick up her sleeve.

Until her appearance, the collection of crime statistics was a ramshackle, district-by-district operation. Different regions classified different crimes in different categories, using different criteria. It was easy-peasy for the police to massage figures in order to meet targets or generate political outcomes. Collin’s solution to that was to standardise the collection of statistics, not a bad idea on the surface. As from 1 July 2010, New Zealand adopted the Australian Standard Offence Classification (ASOC).  This resulted in “reported crimes” becoming “recorded crimes”. Geddit? Previously, three people might “report” the same crime but it is “recorded” just once. Nifty, eh?

By 1 October 2010, the crime rate was on the way down. Now, in 2015, the official crime statistics show the lowest number of recorded offences in nearly 30 years. Unbelievable.

Helping police avoid criminal charges, arming them with tasers, and the “standardisation” of crime statistics were about the only things Collins ever did in the police portfolio. She went on to become the National Ltd™ Justice Minister in which position she was able to do beneficial things. Things like travelling overseas on the public purse to  lecture the Chinese about corruption.

Next up in the Minister of Police portfolio was Anne Chopper Tolley. Never happier than when removing civil liberties, National Ltd™ used her to ram through some more draconian police powers. Tolley, surprise, surprise, had just the statistical data required. Turns out, however, the data was fabricated. And Tolley knew. Didn’t stop her lying through her teeth and nor did it stop National Ltd™ from bamboozling the public. Also, if John Key is to be believed, Tolley never told him that Maurice Williamson was meddling in an active police investigation. Tolley has since moved on to a new National Ltd™ role designed to deliver better public services by introducing high stress levels into the lives of cancer patients.

Tolley’s replacement was Michael “Worm Farm” Woodhouse. Although a blithering incompetent, Woodhouse clearly demonstrated his ability to justify National Ltd™ malfeasance through the dodgy use of dodgy statistics and blatant lies. Being more concerned with making zero hour contracts legal and helping out National Ltd™’s farmer lobby, Woodhouse doesn’t appear to have done anything at all so far as his police portfolio is concerned. Except cover for the police. If John Key is to be believed, Woodhouse didn’t even tell him that Mike Sabin was being investigated by the police several months before the last election. 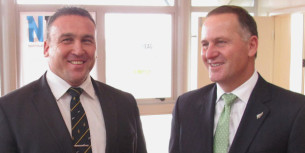 Not much chance of Jarrod Gilbert getting any help from the Minister. What about next up the ladder, the Prime Minister. Nah! He’s the reason.

See, so far as John “The Liar” Key is concerned, academic research and freedom of speech are component parts of truth and reality, the arch enemies of his ideological God, “The Invisible Hand”. As the National Ltd™ Cult of Neoliberalism’s current carnival barker, John Key is required to deny reality by mastering mendacity. He has managed to create an efficient and highly-effective Dirty Politics Machine with such power that even secret SIS information has been used and twisted to stomp rival politicians and game elections. John Key’s Dirty Politics Machine has an early warning system to detect brewing troubles and a database of likely troublesome individuals. The moment an inconvenient truth is spoken, John Key’s Dirty Politics Machine attacks whomever needs to be silenced. There is no consideration of any of the new data, just as there is no consideration of the likely consequences should the data be accurate. Just so long as the data has even the potential to rattle the cognitive dissonance created by neoliberal scripture, it is individuals who are to be disposed of, with malice and without delay. While operating largely under the radar, John Key’s Dirty Politics Machine does come complete with the above-surface, MSM-supplied Distraction and Division Tool (DDT) which . . . oooh, look, pandas; oooh, yuck, rapists and murderers; anyone for a new flag?

John Key’s Dirty Politics Machine has been running hot as other Beehive Priests of National Ltd™ work full-on eliminating any likelihood of just about anyone getting in the way. Remember back in 2011, that BBC “Hard Talk” interview with John Key . . . oh, how we all chuckled when he said if you don’t like one scientist’s opinion, you can get another one. Well, turns out that in New Zealand his statement is now, largely, true. The “rolling maul” is gathering momentum as it nears the try-line.

With science now dealt to, the only remaining sector of academic research left to polish off is that anathema to neoliberalism, the humanities. In order to deal with trouble from that arena, National Ltd™ has decided that any information generated by the function of government belongs to it, and it alone. The constant threat of a visit from the Head Office Human Resources Manager to announce imminent  unemployment keeps public servants and contractors focused on this imperative. As a result, the Official Information Act is now moribund and access to information beyond the scope of the Act is granted only to a chosen few and under strict conditions.

So, since Jarrod Gilbert’s issue is the result of a top-down, nearly complete National Ltd™ agenda, where to now? The Ombudsman? Nah, not gonna work.

The Office of the Ombudsman has been so deliberately underfunded that it can barely do its job; it certainly cannot do its job in a timely manner. Whether it was due to strains caused by resourcing or political pressure, the Chief Ombudsman, Beverley Wakem. has spectacularly demonstrated she really doesn’t quite get how the Official Information Act is supposed to work. Also, Wakem, is old school; she genuinely believes that people who become Ministers of the Crown are motivated by altruistic intention, that they understand the concept of ethics, and they are actually capable of feeling shame. Watching National Ltd™ handle Wakem is like watching Vito Corleone playing with his grandchild.

Maybe Jarrod Gilbert could try again with the police. He just needs to settle down a bit, you know, shut up and play the game. He’s had his media splash, made Woodhouse squirm in red-faced embarrassed but resounding silence, and delivered the police a bloody nose. Maybe in a few months, a year at the most, things will settle down and, who knows, perhaps the police vetting of research might actually result in the police making positive changes they can announce alongside the, slightly delayed, release of unwelcome research reports. WIN/WIN?

Nah, not gonna happen. The police force has a looooong memory, never fails to nurse a grudge, and will not resile unless it absolutely has to. Like just about every Police Commissioner before him, Mike Bush is primarily involved in cleaning up messes left over from the last Police Commissioner. One recent big mess, the Kim Dot Com fallout, is nearing some sort of denouement and the law has been changed to allow what was previously illegal to become standard operating procedure. Yet, believe it or not, there is still action needed within the police to fully complete the required changes left over from the Louise Nicholas outrage. The Teina Pora mess is currently stinking up Police HQ, and the Scott Watson case and compensation for David Bain have come back into view. Bear in mind too, that when a new mess pops up Bush is not adverse to employing a little Dirty Politics himself in an effort to make it go away quickly.

Alongside the heritage messes, the current, endless stream of fuck-ups, and significant reductions in the level of confidence the public has in the police, we see the Ombudsman excoriate Police Commissioners year after year for their tolerance of the blatant and deliberate flaunting of OIA requests. When it comes to that particular aspect, Bush, personally, has form; not that the Ombudsman would know, or even that the local National Ltd™ MP, none other than Judith Collins, is keen for accurate statistics being made available to her electorate.

So, what do we have:

Sorry to say, the public hasn’t had a chance since 2008, and Jarrod Gilbert, along with all academic researchers and scientists haven’t got a chance. Jarrod might “officially” be “approved” by the police, and their contracts might “officially” be sweetened up a tad, but nothing will really change for the better; it will only get worse. At least, for so long as National Ltd™ is in power. And for so long as Beverley Wakem will not recognise the need for her Office to have greater powers. And for so long as Mike Bush refuses to obey the law.

38 comments on “Jarrod Gilbert is tilting at windmills ”