Jian Yang wanted to help the SIS with recruitment 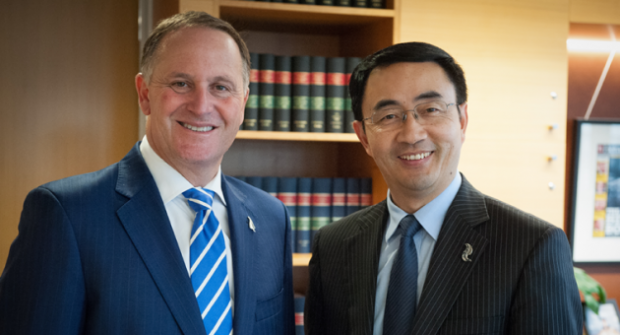 Matt Nippert has made further startling revelations about Jian Yang.

Yang is the National backbench MP who it was revealed just before the election lectured at an elite Chinese spy school before moving to New Zealand and who attracted the interest of our Security Intelligence Service.  Despite concerns he was for a while a member of Parliament’s Parliament’s Foreign Affairs, Defence and Trade select committee.

He has dismissed the allegations as a smear campaign aimed at him just because he was Chinese.  He has refused to be interviewed on the issue ever since the election.

Yang appeared to confirm that the information in his application for residence was not, how you say, correct.

In a press conference after the report of his background broke, Yang said he had served as a civilian officer in the [People’s Liberation Army] and was required … not to name the institutions as a condition of being allowed to leave China.

He declined today to elaborate on who exactly had requested he kept the institutions vague.

He said last month he was not a spy, but conceded he was involved in training spies to assess intercepted communications.

Nippert’s latest revelation is that Yang lobbied ministers in a bid to overturn a national security block on a China-born job applicant taking up a sensitive position in the defence force.  From the Herald:

Months after first taking a seat in Parliament following the 2011 election, Yang took up the case of an aggrieved applicant for a New Zealand Defence Force job who had failed background checks conducted by the Security Intelligence Service.

Yang told the Herald he was merely acting on behalf of a constituent and had done nothing wrong. “I had simply sought answers on the constituents behalf through the appropriate channels, as is the responsibility of every Member of Parliament,” he said.

A February 2012 letter obtained under the Official Information Act written by then-Defence Minister Jonathan Coleman to the applicant, copied in Yang “who has approached my office on your behalf,” and noted Labour Minister Kate Wilkinson had also been lobbied.

And further issues have arisen over Yang’s CV.  His 1998 CV submitted to Auckland University made explicit reference to the “PLA University”.  His immigration and citizenship applications only referred to Luoyang University.  I wonder how he reconciled his statement that he was asked by the system to use his partnership universities with his disclosure to Auckland University.

And he is still rather reticent to talk about the issue.  Again from the Herald:

Yang declined to address questions about the different ways he described his background to different authorities. “I have spoken extensively on the matter and have nothing further to add,” he said.

Yan[g]’s sole comment on the matter was a September press conference where he said he was not a spy – only a lecturer and student – and he had not made any false declarations by only using generic descriptions of where he had studied or worked.

“When I left China I was asked by the system to use my partnership universities,” he said.

This latest revelation may be problematic for him.  The Minister of Immigration has rather strong powers in cases where he determines that information supplied was fraudulent, false, misleading or if any relevant information was concealed.  And

Well done to Matt Nippert for continuing to follow this story up.  I believe this is not the last that we have heard of this story.