John Carter: sleeper-agent for the Left?

The last time John Carter did anything memorable was in 1995.

He was National’s senior Whip. One night, perhaps feeling tired and emotional, he called up a talkback show hosted by then minister John Banks “impersonating a workshy MÄori called Hone, causing widespread offence” (as Wikipedia delightfully puts it).

Carter was out on his ear then.

Now, the Left would like nothing better than for the silly old loon to keep his job as Minister for Senior Citizens.

I mean, how dumb do you have to be to use your speech at the Grey Power National Conference to have a cry because they’re participating in an inquiry into aged care by Labour, the Greens, and the Progressives? An inquiry that Carter himself has refused to undertake himself even as more horror stories from rest homes come to light.

As TVNZ puts it:

“It is not known why the minister would make accusations against members of one of the most powerful voting blocs in the country, especially at their own annual meeting and at a time when many of Grey Power members are worried about the impact a GST increase might have on their financial well-being amid suggestions by the National-led government that their Supergold Card entitlements might be cut.”

The only explanation, if you rule out Carter being a sleeper-agent for the Left, is that he’s an arrogant and out of touch bully. And a dumb one at that.

“He’s meant to be Minister for Senior Citizens. He should be addressing their concerns, not trying to close them down by bullying them into silence.” 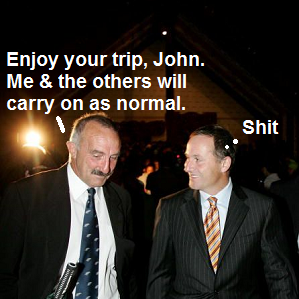 And that’s the dumb part. You don’t try to bully Grey Power. Along side the unions, the it’s largest democratic organisation in the country with 100,000 members. That’s 100,000 voters who won’t forget some do nothing minister trying to bully them.

I love that Carter says participating in the Left’s inquiry will be showing political bias.As Roger Booth from Grey Power Kapiti said on Checkpoint, Grey Power is going to want to be part of any investigation into improving care for the elderly. Turning down the opportunity to take part into an inquiry on a core issue just because it’s not being run by National – now, that would be politically biased.

I say keep this guy Carter on. The grey vote will be leaving National in droves. The only challenge for Goff will be to win them for Labour, because I’m sure Winston Peters is grinning from ear to ear at the moment.

20 comments on “John Carter: sleeper-agent for the Left? ”