John, I am your father

There’s been a bit of excitement round the traps today over this picture from Stuff.co.nz, which tries to merge Helen Clark’s face into Rob Muldoon’s.

Naturally, National Party blogger David Farrar has been wallowing like a pig in shit over Mike Moore’s comments in the Herald comparing the two, and he seems to think the Stuff image proves his point.

Personally, I think this one’s a much better fit: 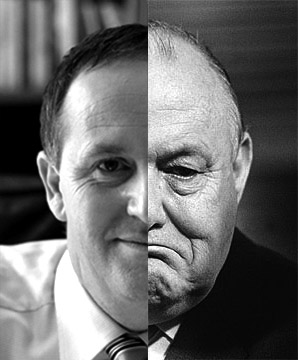 After all, if we’re going to compare anyone to Muldoon then we may as well start with someone who’s actually expressed his admiration for the guy:

CAMPBELL: What did you think of Muldoon?

KEY: Oh well he was a pretty strong leader and at the time it seemed good ah I think you could look back economically now and say um things necessarily weren’t that flash, ah, but at the time I liked his leadership and he, yeah, he seemed like a strong individual.

And is it just me, or is it kinda creepy how even the wrinkles on their foreheads match up?