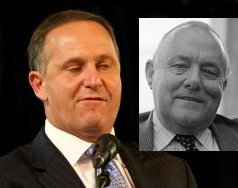 John Key does not seem to have a very high opinion of law.  He thinks that legal opinions are something that can shopped around for and if he does not like an opinion he just needs to go out and get another one.

The Human Rights Commission has found this out today.  It reported to the Government that the GCSB bill poses an unacceptable risk to rights of privacy.  In a press release Chief David Rutherford is quoted as saying:

“The Commission is concerned that the proposed Bills are wide-reaching without sufficient safeguards against abuse of power. There is inadequate oversight and inadequate provision for ensuring transparency and accountability. The Commission notes media reports that these issues are matters of discussion between some of the leaders of political parties in New Zealand.

“We note that the Bills were introduced before the recent media exposure of the extent of mass surveillance by some States party to the Five Eyes arrangement. Public trust in Government intelligence agencies is at risk if surveillance activities aren’t being conducted appropriately and seen to be so.

“It is in the interests of our intelligence agencies to have appropriate transparency and accountability mechanisms in place to maintain public trust. We believe much of the public’s concerns could be alleviated if there was satisfactory oversight of surveillance powers and we propose an independent cross-party select committee to oversee intelligence agencies”.

One of the Commission’s statutory  functions is to report to the Prime Minister on “the implications of any proposed legislation (including subordinate legislation) or proposed policy of the Government that the Commission considers may affect human rights”.  It can do this at any time.  When doing so it is not making a submission on a bill but exercising an important role of providing independent advice directly to the Prime Minister.

John Key has dismissed the Commission’s report and told the organisation to “pull its socks up” for not making a submission on time.  He has made a veiled threat about the HRC’s funding.  The Otago Daily Times contains the following:

“I think the Human Rights Commission actually should take a step back and ask themselves the question why they didn’t put a submission in on time. They are funded by the government and they were the only people that actually couldn’t make the deadline.”

He dismissed the commission’s concerns that there would be a lack of and oversight and accountability, and that the public’s trust in intelligence agencies would be further eroded.

“Actually the bill narrows the GCSB’s scope in its current form, it doesn’t extend it,” he said.

“I actually don’t think it was a very good submission at all and they need to pull their socks up. If they’re going to continue to be a government-funded organisation they should meet the deadline should everyone else.”

UPDATE:  I/S also covers this issue and eerily compares Key’s actions to that of Rob Muldoon.

UPDATE2:  David Rutherford has been interviewed on Checkpoint and stated that Key knew it was a Statutory Report and not a submission on the bill.  The link is here.  HT Bearded Git.