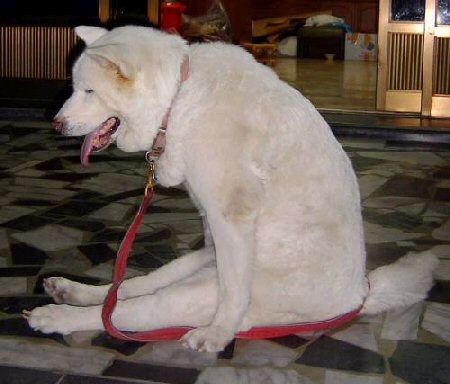 Have you seen John?

Danyl at The Dim-Post has been indulging in his favored pastime again – satire. In this case Cabinet expresses concern over missing PM is about John Key going missing all of the time. Danyl compares him to a pooch avoiding something…

â€˜I usually let John sleep at the foot of the bed,’ a visibly distraught English told reporters at an afternoon press conference. â€˜But lately he’s been whining and scratching at the door every ten minutes so last night I made him sleep in the laundry. We were up late reading Pacific Forum briefings so it was only for a few hours.’ â€˜

Ouch! This is a whole new take on the slippery image that John Key usually evokes. John the dog – that Bill has to stop from slipping his collar. Ummm – a good bit of satire, I can’t shake the images from my head.

I like this explanation, having wormed a few animals in my time.

â€˜Maybe he knew he was getting wormed tomorrow,’ suggested Health Minister Tony Ryall. â€˜We kept it secret but the sneaky little bugger has a sixth sense about these things.’

Mind you, who would want Tony Ryall forcing anything down your throat (like his views on almost anything).

Of course when I was looking for a picture to supplement the one that had formed in my head, I couldn’t get past the image of prime minsterial genital grooming that Danyl’s writing invokes. I did restrain myself. The picture above is from post genital  activities, but has a almost human quality.