Turning up in a pink shirt did little to help John Key win over the crowds at yesterday’s Big Gay Out where he was glitter-bombed on his way to the stage.

Despite pleas from the event compere, John Key attracted vociferous boos and general abuse from a large section of the crowd which managed to limit the Prime Minister’s speech to less than 20 seconds. 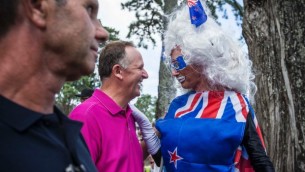 Missing from the MSM coverage of the event is the fact that National Ltd™ MPs Nikki Kaye and Maggie Barry were also subject to the same vociferous booing. Nikki  Kaye’s speech lasted less than John Key’s 20 second effort while Maggie Barry didn’t even bother trying to speak. Also missing from the MSM coverage is that this is not the first time John Key has had a less than positive reception at the event.

While no one in the crowd at this year’s event seemed particularly concerned about National Ltd™’s approach to LGBTIQA  issues, rather, it is opposition to the TPPA which is being uniformly reflected throughout New Zealand society.

202 comments on “John Key, Nikki Kaye, and Maggie Barry booed off the stage ”