John Key’s NZ: the nasty side of the “brighter future”

John Key promised a “brighter future” for NZ: one where they wouldn’t wave good-bye to loved ones heading to Australia; one where he would require a higher standard of his MPs; one where he wouldn’t deliberately avoid telling the truth to the public on controversial issues.  Of course this was just well-crafted spin, targeting the insecurity and hopes of of large numbers of Kiwis, living in diverse circumstances around the country.

So Key opened his 2008 election campaign, claiming Helen Clark had avoided telling the whole truth about the Owen Glenn affair.  Then ended up admitting to a secretive meeting with Lord Ashcroft.

Now that spin is unraveling exposes the deserts of the real that have become increasingly barren under John Key’s watch.  Today the Steve Kilgallon has a further story in the Star Star Times on battling Kiwis who went to Aussie, hoping for a new start, and finding unemployment, nowhere to live, and no access to benefits.

Expat Kiwi Christine Adams, who works with homeless families in south Sydney, says 60 per cent of her clients are New Zealanders.

Almost all are affected by the 2001 law changes in Australia that deny most Australia-resident Kiwis any access to state benefits – and few knew of the rules before they emigrated….

Adams, who moved to Sydney from Auckland in 2007, has advised many recent arrivals simply to stay just for a holiday then return home.

“I’ve talked to several families who have spent every last cent flying their family to Sydney for ‘a new start’ and wonder why another nine people cannot live indefinitely with a family member who has a three-bedroom rented property,” she says.

“There have been families evicted due to overcrowding, because stressed, recently arrived big families are suddenly seeking accommodation with their stable, housed relatives.”

Adams says those who have made a success of the transition have “done their homework” but most of her clients emigrated without guaranteed employment or pre-arranged accommodation or even their paperwork in order, she says.

Many have no family support, while others soon exhaust it, couch-surfing between different homes. This stress can cause domestic violence, relationship breakdowns and financial issues, driving them into homelessness.

This followed Kilgallon’s story last month, on Kiwi Park, and the plight of homeless and jobless Kiwis in Australia. 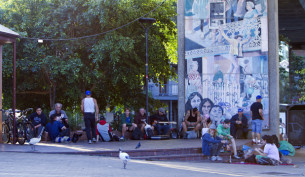 Meanwhile, Aaron Gilmore continues to show the underbelly of National Party MPs callous sense of entitlement. Some people have come forward to accuse Gilmore of unfair tactics towards his housing tenants.

The Ovendens have lived in the Temple Lane home, in the small South Island ski town of Ohau, for about a year but are moving out. They’ve had enough of Gilmore, who is involved in the trust that owns it. They say he:

• Threatened to tell other landlords they were poor tenants, despite saying in a letter they were good people.

• Recorded their conversations without telling them.

• Emailed their lawyer, telling him to “stop making a fool of himself”.

The Herald on Sunday has emails which appear to show Gilmore and long-term partner Jenny Dickinson disagreeing over which of them has rights to manage the property.

The pair have two children.

Neither could be contacted last night.

This is not the “brighter future” that John Key promised all New Zealanders.  It’s a sleazy world of divisions: a brighter future of entitlement for the callous and privileged elite, and dis-entitlement and Struggle Street for too many honest Kiwis battling to find a way to improve their meagre lot.

45 comments on “John Key’s NZ: the nasty side of the “brighter future” ”