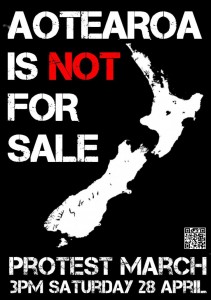 There is to be a Hikoi of Protests against the Government’s Asset Sales agenda.

Starting from Waiora Marae on 24 April, the full itinerary is here, and a full list of the protest marches in towns along the way is here.

Every day has at least one town marching, with the big ones:
Tues 24 April: Kaitaia march 11am
Wed 25 April: Whangarei 3 pm
Sat 28 April: Auckland 3 pm at Britomart
Sun 29 April: Rotorua 3pm
Wed 2 May: Palmerston North 11 am
Thurs 3 May: Porirua 12 noon
Fri 4 May: Te Papa to Parliament

Following that there is a week of protests on various Government policies in Wellington:

But the centrepiece before Wellington will be the big march up Queen St (Saturday 28 April, 3pm), organised by Aotearoa is Not For Sale.  They’re a non-political group, but they’ve got Labour, Green and Mana support for the march.

If you can make it: get there!