Jones to Key: say it to our faces

Far North Labour MP Shane Jones laid down the gauntlet to Key over the ‘we would love to see wages drop‘ scandal. Jones reminds Key that: “all it takes to ruin a Teflon pan is one scratch” and in a second press release lays out his challenge:

‘there’s only one way for Mr Key to prove he was a man of substance come to Kerikeri and debate his policies openly with me in front of the very Northlanders whose lives he intends to entrap and diminish.’

Now, that would be a debate to see. Key against our finest orator since Lange in front of the people of Kerikeri, whose wages Key wants to cut. Somehow, I don’t think Key will be brave enough to take up the offer.

And, really, Key doesn’t need to go up against Jones; his positions change so often he could just debate against himself. It would look something like this: 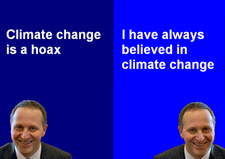 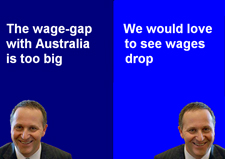