Patrick Gower’s report on TV3 6pm News tonight, shows what is wrong with commerical TV news (in contrast to public service TV).  He gets tonight’s award for Jonolism.  Here’s hoping the Campbell Live tonight will show Gower how it should be done.

However, in contrast to Campbell Live’s more background current affairs format, Gower presents the mainstream news that is watched by many Kiwis as the way to keep informed of the news.  Corporate infotainment News is ratings focused, and, tends to follow “neoliberal” values.  As such, it lacks depth of analysis, highlights conflict and drama, and promotes argument by visual images over sound evidence and logic.

Gower’s effort tonight was faux news.  He gives it a racist framing in order to accuse Shearer of racism in an argument that revolves around it’s own framing and logic, and fails to truly represent the issue in anything like a balanced way.

The video starts with Gower referring back to an earlier 3 News report, where, he claims, a lot of the people at an Auckland house auction were Asian.  He has no evidence whether they are New Zealanders, or foreign buyers aiming to be, or represent, absentee foreign ownership.  He provides no evidence of the proportion of foreign home buyers that are Asian, compared with buyers from other countries.

Shearer has a good line about it being about all foreign owners, but fails to really emphasise the important point – weak.  John Key does his usual, matter-of-fact, low key sell, aiming to show he is being down to earth and realistic.  He shrugs and says that, as far as the Labour policy being “anti-Asian”,

It feels like that to me. If you are of Asian ethnicity, you might be a third generation New Zealander, you’ll almost be expected under Labour to bring your passport to the auction. Well I think that’s a bit offensive.

So Key makes up a hypothetical scenario, and then says it’s what Labour will be encouraging, then calls his own imaginings offensive.  This goes un-remarked by Gower.  And Gower fails to put to Key that Shearer has said it will prevent ALL foreign non-residents from buying NZ houses.

Then Gower goes onto to show an NZ website targeting foreign buyers, that, he says without Australia included, make up 7.7% of the market.  He says it’s the sort of website that a Labour government would close down.

This is the website, NZ Connections. And it’s main page promo says:

So it seems to be encouraging people to buy property to get returns from renting.  No mention of targeting Asian buyers anywhere obvious on the main page.  But it does have a page comparing property ownership in South Africa compared with NZ, in a section entitled “Investing in NZ”.

In the section entitled, “Property Options”, it says:

We’ve found that the majority of our South African purchasers are working with two main criteria in their search for a property in New Zealand:

1) A future-proof investment – with the prospect of no immediate solutions to the economic and political difficulties at home, many South Africans are looking off-shore for a safe haven for their Rand and a ‘Plan B’ home. New Zealand offers just that.

2) Solid return on investment – New Zealand property is unusual in that it can offer cash-flat or cash-positive ROI. The rental and tourism markets are thriving, ensuring a steady pool of tenants and holidaymakers for properties.

No mention of any other nationality.

Back to the Gower, video.  Key calls Labour’s policy “desperation”, Shearer says it’s about putting New Zealanders first and, for some unknown reason, John Banks’ talking head pops up saying “I believe it’s racist“. Is Banks an authority on racism in NZ?

Gower uses his own shonkey polls to indicate most Kiwis will favour Labour’s policy. Then Russel Norman confidently and convincingly nails it:

John Key is purposely turning this into a divisive race argument, for purely political reasons.

The video ends with the anchor, Hillary Barry, going live to Gower in Parliament.  The location is meant to provide visual strength to the notion that, somehow Gower is an authority on the issue.  This is an old infotainment trick.  The “expert” that an anchor traditionally interviews, in a quality broadcast, would be an actual expert on a topic, not a journalist posing as an authority.

And Gower as authority in Parliament, bookends the video the way it began, framing Labour’s policy in John Key’s terms as “desperation” and racist – albeit with a weak attempt at balance saying the housing issue is a weak area for Key. Gower labels the tactic as “dog whistle” politics. But this is just a circular argument, because it is Key and Gower that are whistling loudly for the dog of public opinion. 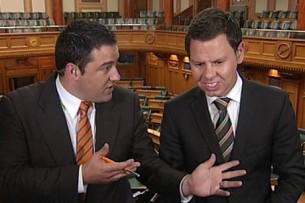 You are NOT the story

Now to catch up with Campbell Live, which has apparently included something on the GCSB, while I’ve been typing.  Let’s see whether it rates as Jonolism or true Journalism.

The Law Society, the Human Rights Commission and the Privacy Commissioner all oppose it, and they’re not alone – so does air marshal Sir Bruce Ferguson, the former chief of New Zealand Defence Force and director of the GCSB, a man knighted for his services to the military.

Surely, when he expresses concerns about new spying powers for the GCSB, and most particularly about the way they’re overseen, we should listen.

Campbell sticks to being a journalist interviewing someone who is an authority in their field.  He cites the arguments and reports by leading organisations in relevant fields, and doesn’t rely on cheap tricks to create an argument by false association with selected images and unsupported imaginings.

50 comments on “Jonolism or Journalism? ”