Journos on the declining state of journalism 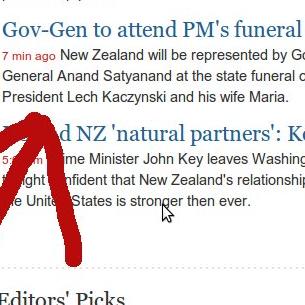 A mate sent me this screen grab: “Gov-Gen to attend PM’s funeral”.

To me, it says a hell of a lot about the state of the media in this country that a sub-editor, or whoever they have writing headlines these days, does not know the difference between a president and a prime minister, and that no-one else at Stuff spotted the mistake before it went up.

It reminded me of the very good segment in Mediawatch last Sunday about the media’s coverage of non-stories like Andrew Williams’ drink and Charles Chauvel’s comments on the plane.

While it was a pity no-one in the segment made the connection between the side of the spectrum being attacked with these stories and their obvious source, Mediawatch took a good look at the issue of what’s going on in the media that these stories are being picked up. They interviewed several major journos, starting with Colin Espiner who wrote a blog post the other day attacking this decline in journalism.

In the interview, Espiner said there had been times that press gallery staff had chosen not to run stories that they knew their news editors would want to run if they knew about them. Espiner didn’t really offer an explanation for the growing prominence of these stories. But I think that we got the reason a little while later in the piece when Duncan Garner talked about how he is having to produce more and more material, and make more and more appearances.

They’re understaffed and they’re under intense pressure to produce more. The result is the ‘easy’ stories, often coming from some mud-throwing blog, get picked up and more and more material is being produced by generalist reporters who don’t know their arse from their elbow when it comes to politics.

Espiner talked about this last factor and the importance of getting experienced press gallery journos up to cover the Auckland mayoralty. I think his belief that the press gallery won’t get taken in by all the mud-slinging from the various candidates is a bit on the optimistic side though.

I don’t think that political news coverage is getting more sensationalist and more vacuous because the public wants it that way. One only need look at the slamming readers gave the Herald and Stuff in their online comments for covering the Chauvel ‘story’ to see that we don’t want politics reduced to gossip column pap. The problem is the media, not the audience.

And it’s not just limited to politics. Another mate sent me this story on exo-planets. He was simply astounded by the sentence “The planets are revolving around nearby stars within 1,000 light years of our galaxy.” The agency journo, who one would expect is in their science team, doesn’t know the difference between a solar system and a galaxy. I guess it’s a bit like a journo writing political pieces not knowing the difference between a prime minister and a president.

17 comments on “Journos on the declining state of journalism ”