Minister for Talking Big and Not Delivering, Steven Joyce, had his second opinion piece in the Herald of the year (the Herald doesn’t usually run politicians’ opinion pieces) and, naturally, it bore no relation to the ‘vision’ in the previous one, or any of the 5 point strategies or 8 point action plans he has produced to date. Instead, it said ‘wouldn’t it be great if more international students came here?’. Problem is, his actions are driving them away.

To which we’re left asking: so what are you doing about it?

Because Joyce is cutting tertiary education. 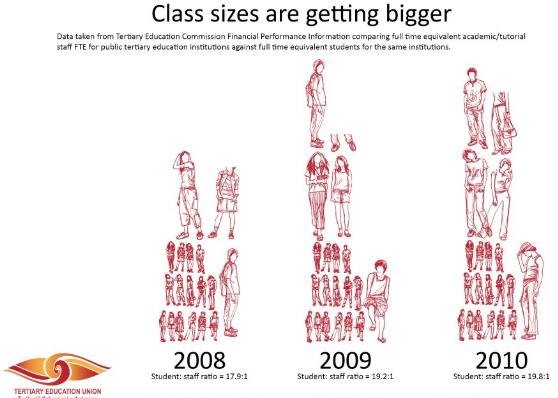 With the exception of Waikato, each New Zealand university’s international ranking has fallen under National. Auckland has plunged from 65th to 82nd – and that’s the only one in the top hundred.

How are you going to get more people to come to student at universities of declining relative quality? ‘Study in Auckland, at least it’s not Tasmania!’

This is really typical Joyce – cut the quality and up the marketing. It’s no good for our young people trying to get an education, and it sure won’t get more people to come here to study from overseas.