The recorded crime rate has been dropping for two decades now mostly due to changing demographics. More good news this year with a 4.8% drop, mostly attributable to a 21% fall in Canterbury. But something’s a little off in these numbers. The number of offences recorded has fallen, yet the percentage solved has fallen even more. Shouldn’t less crime mean more resources to solve the ones that do happen?

For the past 20 years, the number of recorded offences has bounced around between 400,000 and 450,000 – the rate trending down as the population grows. 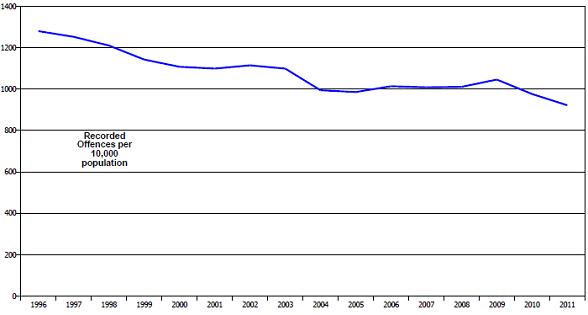 With police resources growing and the crime rate falling, a higher proportion of crimes were resolved, rising from 38% in 1994 to 48% in 2009. 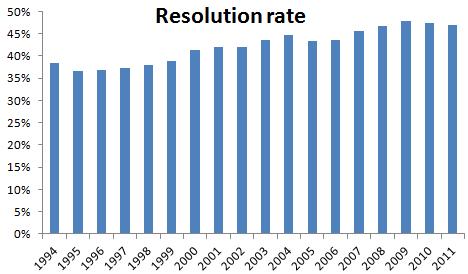 But something strange happened in the last two years – recorded crime drop about 10% but the number of resolved crimes fell by 12%. 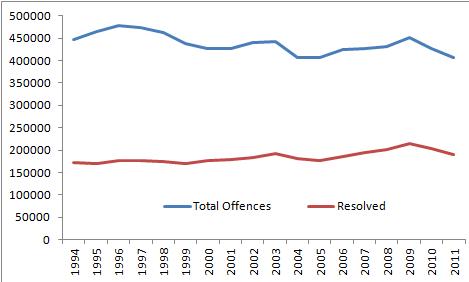 What’s going on here? Why is a drop in the number of offences tied with a proportionally larger fall in resolutions when we would expect fewer crimes mean more of the crimes that do happen get solved?

Well, a quarter of crimes are in categories that are only really detected by police action – drugs offences, weapons offences, environmental pollution, and administrative offences.

Because no crime gets recorded most of the time unless it’s due to an arrest these offences have very high resolution rates – unlike burglaries, for instance, drug offences don’t tend to get reported by the public but, rather, detected by police action.

It’s very simple to cut the number of recorded drug or weapons offences – stop doing raids on gangs and drug dealers. Likewise, move resources away from administrative offences and, ta da, the number recorded falls. Despite making up 24% of recorded offences in 2009, these classes of offence accounted for a disproportionate 42% of the fall in recorded crimes over the next two years.

Did the number of these crimes really fall or did the police stop looking?

The other out-size fall in crime numbers is in Canterbury with recorded thefts, robberies, burglaries, property damage, public order and fraud offences down 9,250 in the past two years. Just those offence classes in only Canterbury account for 20% of the nationwide fall. Well, I would submit that there are thousands of deserted houses and areas nearly devoid of residents in Christchurch – plenty to steal and places to do your dirt out of the eye of neighbours and PC Plod. Or maybe all the crims joined the exodus from the garden city to Australia.

Just as police devoting fewer resources to certain types of crime would cause recorded offence and resolution numbers to drop regardless of what was happening in the real world, so criminal activity moving out of sight in Christchurch would decrease recorded offenses.

I think that crime rates is trending down due to the falling proportion of young men in society but the explanation for the sudden drop in both recorded crimes and solved crimes in the past two years might not be good news.